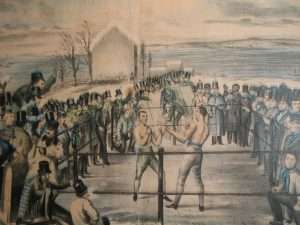 In the United States, these men bolstered the “manly art of self defense” by competing in local matches, opening gymnasiums, arranging fights, and training a new generation of American boxers.

Among those who crossed the Atlantic were William Fuller and George Kensett of Liverpool. These “Professors” of pugilism began their careers here with a series of exhibitions with amateurs in New York, Philadelphia, and Baltimore and soon opened their own gymnasiums in New York. Fuller and Kensett, along with fellow Englander Bill Tovee, were among the most respected teachers of the “science” of boxing in the 1820s. By the time the 1838 London Fight Rules were adopted, American boxing’s paper of record, The Spirit of the Times, had been founded and boxing in the States had become even more popular than it was in England.

Perhaps no object better represents the growth of boxing in America than a small sign of gilt glass with one simple word painted in black: Oysters.

What’s known about the sign is gleaned from a few sporting articles, the recollections of old sporting men, and a rather lengthy article from 1902, when the long-missing sign reappeared in the collection of A. K. Brooks, of Hartford, Connecticut. It had served as a totem, a prize, a trophy, stolen and stolen back, held in great esteem and hung in the shrines of early 19th century American pugilism.  Here is its story, told from the available sources.

The sign was said to have been painted in 1832 by William Fuller for Ben Sprague,* who operated a oyster and fish market at Union market in Houston Street in Manhattan, and supplied an oyster stand at the Weary Wanderer’s Hotel on Columbia Street. The origins of it’s journey from there are now shrouded in mystery, but whether it was stolen or carried triumphantly, it was soon in the possession of Abe Vanderzee.

Vanderzee was a frequent “second” at boxing matches in the period, but better known as the leader of a “gang of Whig bullies” who led nativist in riot against Irish immigrants in Albany in 1842, and later as a Third Ward policeman.  In January 1842 Vanderzee seconded fellow nativist Tom Secor in his fight with Irishman James Ambrose, better known as Yankee Sullivan. The fight was arranged at “The Arena,” Bill Ford’s saloon and sporting man’s headquarters at 28 Park Row, where the “Oysters” sign probably hung on the wall.

When Sullivan whipped Secor in 67 brutal rounds, he was declared unbeatable by his friends and awarded the “Oysters” sign. He installed the sign at his own saloon, the Sawdust House, then in Division Street. “His house became the resort of the pugilistic fraternity,” one regular remembered about 15 years later, “Some of the more enthusiastic admirers of ‘Yankee’… would get together on a Saturday night, in a back room of the Sawdust house, and over their well filled glasses, would sing and talk of the exploits of the daring Sullivan, who couldn’t be beat.”

Tom McCoy was an Irish immigrant boatman from Whitehall, NY. Trained in Albany and described as “a young man of fair character, marred by a fondness for pugilistic display and for the company and the scenes to which this taste introduced him,” he began to make a name for himself in New York boxing circles.  He upset Cheshire Bob and soon faced Christopher Lilly, and up-and-comer that had badly beat Tom Murphy of Troy. Lilly and McCoy met on the Hudson River at Hastings, NY in a 2 1/2 hour match that would become the most notorious fight of its time when McCoy died in the ring. The Oysters sign found it’s way into Lilly’s possession but he returned it to Yankee Sullivan when he opened a new Sawdust House at 9 Chatham Street in 1846.

In April 1848 a rough-and-tumble fight took place between Tom Hyer and Yankee Sullivan at Sherwood’s (previously Florence’s) at the corner of Broadway and Park Place, in which a drunk Sullivan was badly beaten. “It is scarcely possible to describe the excitement which this event occasioned in the public mind,” one observer recalled. “For five or six days, nothing else was talked of in all circles, and for the corresponding nights Broadway swarmed with the crowds which concentrated from all quarters of the town to catch a glance, while parading from one drinking house to another, of the man who had whipped Yankee Sullivan.” Apparently as a result of this fight, the oysters sign was taken off Sullivan’s wall that night by “Awful” Gardner (whose right name was Hezekiah Orville Gardner) and carried to The Gem, another sporting man’s headquarters at 324 Broadway owned at the time by Aaron C. Burr.

On October 20, 1850, the sign was taken to Boston, where it found a home at Sportsman’s Hall on Elm Street. From there Harry Finnegan carried it to Ed Price’s saloon on North Street, where he tended bar.  From there it was carried back to New York and hung in Sullivan’s newest Sawdust House on Chatham Street (he operated eight Sawdust House saloons at varying locations in the city over the years).

On October 22, 1854 the sign was taken to The Abbey, a roadhouse popular with the sporting fraternity and horsemen on Bloomingdale Road (now Broadway). Bill “the Butcher” Poole was said to have taken it from the wall there and brought it to Stanwix Hall, where he would be killed in a old-west style shoot-out the following February.

The oysters sign made it’s way to St. Louis, where Johnny Robinson retrieved it and returned it to New York State, giving it to noted sportsman and Buffalo saloon keeper Izzy Lazarus. Izzy sent it to his son in New York, Harry Lazarus, who hung it in his own saloon in Chatham Street. When Harry moved to East Houston Street the sign came along and it was still hanging there when Harry was killed by a rival saloon keeper on January 3, 1865.

From there the sign seems to have made its way around various fire houses in the city. Among those who are said to have held the sign are boxers Tom Hyer and Joe Coburn; gambling house operators Kit Burns and Harry Hill, and politician Mike Walsh. It was allegedly stolen by a firefighter from Big Six, the Tammany-inspired Engine Company, of which Boss Tweed was foreman. It disappeared for some time and was found in Red Leary’s saloon when he was arrested for a bank robbery in December 1878.

The sign found it’s way to collector A. K. Brooks in Hartford and was last reported to be hanging at the Honiss Oyster House in Hartford in 1918.

* Ben Sprague, may be Ned Sprague, a noted pugilists at the time.