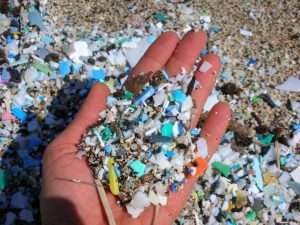 We’re told that diamonds are eternal, but it turns out that glitter, which is just as sparkly and way cheaper, could be equally enduring. Parents, teachers and day-care providers know that despite their efforts to wash the stuff down the drain, glitter will inevitably wind up in their breakfast, their eyes, or on the lapels of their business suit worn to a crucial meeting with the boss.

I never would have imagined that glitter could be a pollutant of concern. At my age I need glasses to find a postage stamp – it’s a long shot that I could help pick up glitter. It seems fair to ask whether there aren’t bigger fish to fry.

Apparently that’s exactly the problem: microplastics have become one of the most serious threats to marine and freshwater ecosystems. Defined as plastic shards measuring five millimeters or less in diameter, they pose a danger to aquatic organisms as well as to human health.

Microplastics, which can act as carcinogens and endocrine disrupters, have made their way into much of our food supply. They’re even found in many bottled water brands and public water systems.

Glitter is especially bad, as each plastic square is bonded to a fleck of metal as well as to a toxic pigment.

In 2020, the British newspaper The Guardian ran a story headlined “Glitter Is an Environmental Abomination,” and The Blue Ocean Society for Marine Conservation released a statement calling glitter “A Sparkling Nightmare for Oceans.” It seems that glitter is anything but green.

Fortunately, the glitter problem will soon have an elegant solution inspired by bird feathers and insect wings. In a study published in the journal Nature Materials on November 11, 2021, researchers from Cambridge University in the UK detailed how they made nontoxic, biodegradable plant-based glitter by copying nature.

It has long been known that some birds like indigo buntings and hummingbirds don’t actually have pigments in their feathers – the red, green or blue cannot be chemically removed or leached away. Their flashy “paint job” comes from the way light reflects off of microscopic structures in their feathers. This phenomenon is called structural coloration.

Led by Cambridge University professor of chemistry Silvia Vignolini, a team at the University’s Photonics Lab used wood pulp to make multicolored glitter. They were able to engineer nanoparticles of cellulose into helicoidal forms shaped somewhat like a spiral staircase that reflect and refract white light at various wavelengths.

While her team used wood pulp for convenience, Professor Vignolini believes that any plant-based fiber such as banana peels or crop waste can be used to make structural colors in this way. She also projects that many toxic dyes and inks will soon be replaced by her team’s safe and sustainable technology.

The research team figured out ways to influence the size of the “steps” within cellulose helixes as well as to regulate how tightly the spirals are coiled in order to make a spectrum of structural pigments. Sheets of their manipulated cellulose were then ground up into pieces of appropriate size.

But their new product is not mere colored confetti – it sparkles as effectively as traditional plastic-metal glitter does. This is due to the fact that light is constantly striking the helicoidal forms at different angles.

And as an observer moves, even slightly, relative to the structures, it makes them appear to twinkle as well. This will be the first truly green glitter: biodegradable, compostable, renewable, and utterly nontoxic. Maybe now only diamonds will be forever.

You can access the Cambridge University study on cellulose-based glitter here.