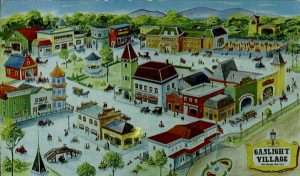 Charley already owned a number of other investments, including Holiday House on the shores of Lake George, and Storytown, U.S.A., an amusement park with a Mother Goose rhymes theme (later expanded with Ghost Town, a western boot-hill theme, and Jungle Land, an animal park) which he opened in 1954. He later went on to build the Tiki Resort (one of America’s last original Tiki bars), a short lived wax museum, the Sun Castle resort, and more.

Owing to the success of Storytown (now known as Six Flags Great Escape), Charley opened Gaslight Village in 1959 on the site of the former Delaware and Hudson Railroad‘s Lake George rail yards (where the turntable stood). 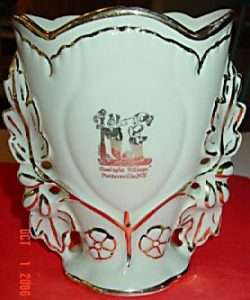 What many don’t know is that Gaslight Village was briefly located at what is now Smoke Rise Campground in Pottersville, NY, about 25 miles north, a location that had a long history of roadside attractions.

Of course Gaslight Village was well known for its “yesterday’s fun today” radio and television commercials. Its “Gay Nineties” theme was actually more popular among adults then children, perhaps by design. While Storytown closed at 5:30 pm, Gaslight Village didn’t get rolling until about that time and was open until 10:30 pm.

The park was designed in part by Arto Monaco, who owned the popular Santa’s Workshop and Land of Make Believe in Essex County. A big part of the charm of the park was its entertainment which utilized a two-way stage that, with seating for one thousand, allowed for vaudeville acts to perform outside during nice weather and inside the Opera House when the weather was inclement. (You can see a video here).

Nearby the Palace Theater had continuous showings of silent movies including those featuring Harold Lloyd and Charlie Chaplin. Around the bandstand special comedy performances where often held, such as those by a pack of Keystone Cops. The theme park also hosted sing-alongs, melodramas, and an Ice Revue. 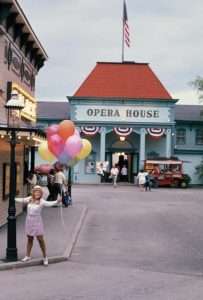 Among the featured rides assembled for the park were an 1800 Merry Go-Round, an 1825 Bicycle ride by George Tilyou (founder of Coney Island’s Steeplechase Park), the Green Monster, Mexican Scrambler, a Ferris Wheel, the Shaving Mug, a Paratrooper, the Round-Up and  Bumper Cars.  The classic dark ride Flight to Mars came to Gaslight Village by way of Palisades Park and Coney Island.

Many folks remember Charley’s large classic and antique car collection which was installed in the Carriage Shop (later dubbed the Cavalcade of Cars) until it was moved to its own building (with a separate entrance fee) across the street.

A Fifth Avenue Double Decker Bus was in operation around the park offering rides as was a horse drawn trolley. The car collection included the 1933 Duesenberg once owned by Greta Garbo (later sold to a Texan for 1.4 million; Wood donated 1 million of the proceeds to the Hyde Collection in Glens Falls, NY). 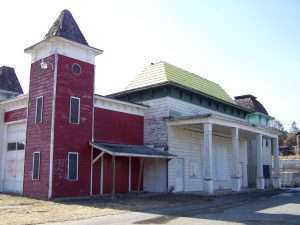 Other pieces in the collection included three large movie model ships from  the movie TORA,TORA,TORA, a car shaped and painted like a can of V8 Juice, an Evel Knievel motorcycle, and a Chitty Chitty Bang Bang movie car.

Gaslight Village closed its doors in 1989 and became Lake George Action Park (a go-cart track) which has since also closed. All the rides were auctioned along with many of the cars.

In 2010 the Lake George Association, Lake George Land Conservancy, and other organizations acquired the land on which the remains of Gaslight Village stood. They were demolished and in 2012 the Charles R. Wood Foundation gave $750,000 towards the costs of a $1.8 million park and concert and event space named Charles R. Wood Park, which was finally dedicated in 2019. Across the street, where Cavalcade of Cars once stood, a wetland has been restored.