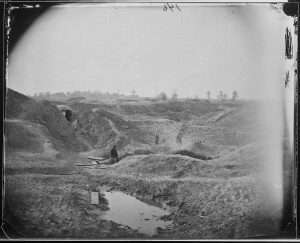 During the U.S. Civil War, the Confederate Army required enslavers to loan the people they held enslaved to the military. Throughout the Confederacy from Florida to Virginia, these enslaved people served as cooks and laundresses, labored in deadly conditions to mine potassium nitrate to create gunpowder, worked in ordnance factories, and dug the extensive defensive trench networks that defended cities such as Petersburg, Virginia.

To track this extensive network of thousands of enslaved people and the pay their enslavers received for their lease, the Confederate Quartermaster Department created the record series now called the “Confederate Slave Payrolls.”

The National Archives holds these records, comprising nearly 6,000 payrolls for enslaved labor. The documents shed light on the lives of enslaved people loaned to the Confederate Army during the Civil War, and may provide a wealth of genealogical information relating to the names and home counties of African Americans.

The payrolls show the time period covered, the Confederate officer under whom the enslaved people assigned, the place of service, names of the enslaver, names and occupations of the hired enslaved person, number of days worked, daily rate of wages, amount paid, and the signature of the person receiving the payment.

For example, this payroll record shows that for each day of March 1862, a man named Ben cooked for the Confederate military stationed at Pinners Point, VA, earning 60 cents a day that would go to his enslaver.

Prior to the Civil War, Moses Hunt was a field laborer at a plantation called White Hill, which is now partially protected in the modern boundary of Petersburg National Battlefield. “Confederate Slave Payroll 1099” shows that Charles Friend hired Moses and another man named Henry to construct earthworks at Williamsburg in the spring of 1862. 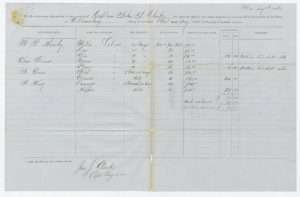 During the Civil War, the manufacture of gunpowder became a serious concern for the Confederacy. One of the ways the Confederacy acquired potassium nitrate, a critical element of gunpowder, was through creating “nitre beds,” large rectangular pits filled with rotted manure and straw and covered weekly with urine and liquid from privies and cesspools. The people employed by the Confederacy to do this noxious work were enslaved.

You can learn more about the enslaved women of the Confederate Nitre Works on the National Archives’ Pieces of History blog.