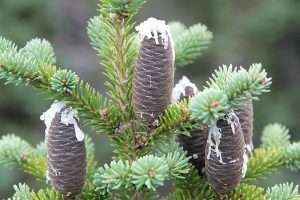 Every year my husband and I cut a Christmas tree on family land. We look for a young balsam fir growing in the power line right-of-way or in a forest clearing.

Fir is our favorite type of Christmas tree because of its delightful, pungent fragrance. While Christmas tree farmers cultivate a variety of fir species, balsam fir is the only type of fir native to Northern New York.

Balsam fir can be distinguished from other conifers by its pointed, spire-like crown and flat, dark green needles, which are 3/4-inch to 1 1/2-inches long, with two silvery lines on the underside. These lines contain the stomata, or pores, which are visible with a magnifier. In contrast, red spruce has prickly, yellow-green needles, which are square in cross-section, and eastern hemlock has shorter needles and an overall feathery appearance. The bark of young balsam fir is smooth, gray, and marked with resin blisters; on mature trees it develops scaly plates. Ripening fir cones are purplish and stand erect on upper branches like Christmas candles.

The balsam fir’s conical shape is designed to shed snow and ice, enabling it to grow in cold climates and retain its leaves all winter. As snow collects on a fir, the side branches droop until they touch the supportive tier of branches below – then the snow slides off the steep sides. By keeping its needles in winter, the balsam fir can photosynthesize in early spring while still surrounded by snow, getting a jump on the growing season.

According to author and biologist Bernd Heinrich in his book The Trees in My Forest the conical shape of a fir is achieved by its growth pattern. Each spring, a shoot grows straight up from the tree’s tip, and a whorl of three to six branches grows horizontally. The number of whorls of branches corresponds to the age of the tree (don’t forget to count whorls that have been shed, too, evidenced by whorl scars). 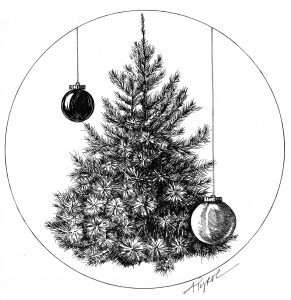 Balsam fir is the keystone species of eastern Canada’s boreal forest and is found from the Maritime Provinces west to Alberta. It ranges south through New England and the Great Lakes to Pennsylvania, with isolated populations in the southern Appalachians. In our region, fir grows in a variety of habitats and soils.

Most often it is found in high-elevation spruce-fir forests, and dominates in the subalpine zone, where trees are stunted and formed into strange shapes by wind. Balsam fir is also common in cold, moist pockets in the lowlands, such as in the Adirondacks and Vermont’s Northeast Kingdom, where it grows alongside red and white spruce and tamarack.

On the slopes of higher peaks “fir waves” form. These gray bands of dead balsam fir are caused by strong winds and heavy accumulations of rime ice on the exposed edge of canopy gaps. Trees here lose their needles and die. Under the protective shelter of the dead trees, young fir sprout vigorously as sunlight reaches the soil. Fir waves shift over the course of many years, moving in the direction of the wind.

Farm-grown balsam fir is one of America’s most popular Christmas trees, and that is its main economic value. Fir boughs are also used for wreaths and the needles to stuff balsam pillows. The wood is rather soft and weak, so it is used primarily for pulp, light frame construction, paneling, crates, and plywood. Fir resin has been used for medicines, turpentine, glue, and varnish. Native Americans have traditionally used the resin to treat a variety of ailments, and it was applied to soldiers’ wounds during the Civil War.

Balsam fir is valuable to many species of wildlife. Spruce-fir forests, where the snow is not as deep as in nearby hardwood stands, provide critical winter shelter for deer and moose, which heavily browse fir needles.

Small mammals such as snowshoe hare hide in dense stands of young fir. Ruffed and spruce grouse feed on the needles and buds. Porcupines consume the bark. Red squirrels, crossbills, and other songbirds extract the winged seeds from fir cones. In summer, balsam fir provides nesting sites for birds such as the yellow-rumped warbler and purple finch.

As we set up our Christmas tree this year, I’ll take a moment to think about the many important roles balsam fir plays in our northern forests.

Susan Shea is a naturalist, writer, and conservationist who lives in Brookfield, Vermont. Photo of Ballsam Fir cone courtesy Wikimedia Cephas. Illustration by Adelaide Murphy Tyrol. The Outside Story is assigned and edited by Northern Woodlands magazine and sponsored by the Wellborn Ecology Fund of the New Hampshire Charitable Foundation.