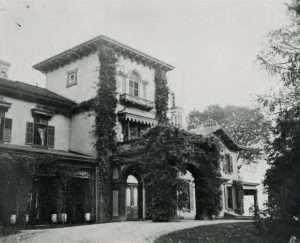 The Delano family hailed from Massachusetts and traced their origins to the Pilgrims and the Mayflower (they once spelled their name Del de Lannoy). The family was tied to the sea and eventually settled in Fairhaven, Massachusetts.

Warren Delano II left home in Fairhaven for China in his 20s. According to the Roosevelt Presdential Library, “Warren lived in China for nine years, earning the position of Chief of Operations for Macao, Canton, and Hong Kong. His greatest achievement was the expansion of Russell Sturgis & Company’s trade in opium.” He was made a partner of the firm in 1840.

Warren returned to Massachusetts, where he met his future wife Catherine Robbins Lyman (1825–1896). She was the daughter of a prominent justice from Northhampton, Joseph Lyman III.

According to the FDR Presidential Library, they were married November 1, 1843 and the newlyweds left for Macao where they stayed until 1846, when they returned to the U.S., settling in New York City.

Warren bought a home at 39 Lafayette Place (now Street), also known as Colonnade Row. Some sources say the Delanos looked for a home in the Hudson Valley, after seeing the area’s beauty.

Catherine and Warren found a home on a farm that they rented on Danskammer Point, about six miles north of Newburgh, but it wasn’t for sale. According to historian Shannon Butler, they eventually the purchased the Higginson farm, which would form the nucleus of Algonac.

The Delanos hired Andrew Jackson Downing and Calvert Vaux to build an Italianate country estate complete with a three-story tower, and lawns and gardens planted with native and exotic trees, and flowering shrubs from China.

Algonac was completed by 1852 and Warren hoped to live the life of a country gentleman. He was heavily invested in real estate and coal when the Panic of 1857 changed that plan temporarily. According to his daughter Sara Delano Roosevelt’s book, My Boy Franklin: “My father lost almost everything, and when he tried to sell our house, he found almost all prospective buyers in the same plight.”

The Panic of 1857 began after the failure, on August 24, 1857, of the New York branch of the Ohio Life Insurance and Trust Company, followed by a run on banks by people attempting to withdraw their money for fear of losing their deposits. When the S.S. Central America sank carrying a large load of California gold it exacerbated the problem.  This was when the U.S. was on the gold standard and the widely reported sinking added to the panic. Warren was forced to sell the family’s home in New York City.

In 1859, he left Algonac for Hong Kong, which was an English possession since the First Opium War in 1841. When he realized that he would be there for an extended period of time, he brought his children over and the family remained in Hong Kong until after the Civil War.

In 1865 the family returned to Algonac, which Warren had rented to a tenet while the family was away, and successfully rebuilt his fortune. In 1880, Warren and Catherine’s daugther Sara Ann Delano (1854–1941) married her sixth cousin James Roosevelt I, the father of FDR. (His first wife, and second cousin, Rebecca Brien Howland had died a few years earlier).

In 1884, a heart-wrenching tragedy occurred at Algonac. Nineteen-year-old Laura Delano, the youngest daughter of Catherine and Warren, was the last child still living in the house. The rest of her siblings had left for school or married. On Sunday, July 20, 1884 the family gathered for church.

Laura was upstairs in her bedroom on the second floor of the mansion, heating curling irons over an alcohol lamp as she was getting ready for church, according to the Newburgh Weekly Register. Suddenly there was a commotion coming from Laura’s room. The alcohol in the lamp was spilled onto Laura’s robe, and ignited. She ran screaming from the room, down the stairs and out onto the front lawn.

Her cries attracted the attention of the family and Fred Hitch, her sister Annie Delano’s husband, wrapped her in rugs to snuff out the flames. Badly burned, Laura was brought inside clinging to life. The family doctor, Dr. Smith Ely from Newburgh, said Laura would not survive her injuries and tried to make her as comfortable as possible.

Laura lapsed into unconsciousness and took her last breath at 3 am the next morning. Her father opened his diary for that day with the words of “a dreadful accident.” Her body was taken to the family mausoleum at Riverside Cemetery in Fairhaven. (Years earlier Warren had created the cemetery and it was dominated by the Delano vault).

Historians have debated whether this episode influenced Franklin Delano Roosevelt’s lifelong fear of fire. According to James Roosevelt, FDR’s oldest son, his father had a phobia of being trapped in a fire or the house being consumed by fire. He wrote: “his helplessness did give Father one phobia, or rather intensified one that always bothered him-a fear of fire. Fire was the only thing I ever heard Father confess-either before or after polio-that he feared physically.”

Catherine and Warren Delano continued to live in the Algonac until they died in the late 1890s. After their deaths the house passed to Warren’s daughter Annie and Fred Hitch, who had snuffed out the flames in 1884.

Another tragedy would befall Algonac when it caught fire on Sunday, March 5, 1916 in the early afternoon. Annie’s husband had died in 1911, so other than servants Annie lived alone in the house. According to the Middletown Times Press, when workers on the estate could not bring the fire under control, a call was made to the fire department in Newburgh, who dispatched three engines. The contents of the first and second floors were mostly saved, but “all that remains of the building are the four brick walls and the chimney which are standing,” the newspaper reported, estimating the loss at about $10,000. 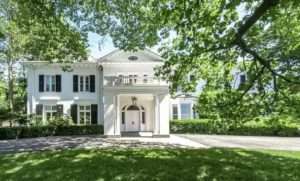 It’s believed the fire originated in the attic, not unlike the fire in the FDR mansion in Hyde Park in 1982. All Annie could do was watch Algonac burn to the ground.

The Delano family would rebuild the home and it was eventually inherited by Frederic A. Delano, who lived there until his death on March 28, 1953. The same year the estate was sold by the Delano heirs to Broadman Enterprises, Inc., of Stony Point, NY.  According to The Newburgh News (July 8, 1955), the company was busy building a development including 124 ranches and split level homes.

Today all that remains of the estate is the house and gate house at the head of Susan Drive, but it’s back on the market, for the first time in about 60 years.

Editor’s note: Although claimed to be an Algonquin word, Algonac is actually an abbreviation of “Algonquin” with the suffix “-ac” meaning “belonging to.”

Thanks to Fred D. Grant Jr., for his insight and suggestions in researching his family’s home.