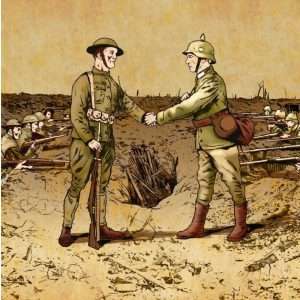 On Christmas Eve of 1914, a widespread spontaneous truce was declared among the weary soldiers of the First World War along the Western and Eastern fronts in Europe. The Christmas Truce has become one of the most famous and mythologized events of World War I.

On Wednesday, December 8th, the Oneida County History Center will host Joe Schmidt for a conversation on the Christmas Truce, the real story behind it and why it happened.

Joe Schmidt, Public Relations and Advertising Manager for Munson-Williams-Proctor Arts Institute, is also an historian focusing primarily on early 20th century American history. A graduate of Utica College of Syracuse University, one particular focus of his research is the origins of the World War One and the truce that transpired during Christmas of the war’s first year.

Illustration of the Christmas Truce from the Illustrated London News, January 9, 1915 by A. C. Michael.