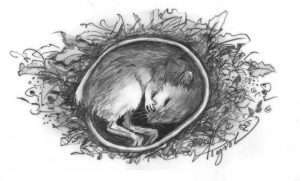 “Shhh,” I tell my 5-year-old son, “there are animals sleeping, right under our feet.” He presses his ear against the frozen ground, hoping to hear the slow, sleepy breath of a snoozing mammal.

I tell him that if he could pull back the earth like a blanket and peek in, he might see a small, mousey ball of white, black, and yellowy-orange fur curled tightly inside a nest of dried grasses and dead leaves.

A long, sparsely-furred tail would be coiled like a thin ribbon around this little package: a woodland jumping mouse, whose pre-hibernation diet consists largely of truffles.

Woodland jumping mice (unlike the closely related, field-dwelling meadow jumping mice) live in the coarse woody debris of hemlock-hardwood and spruce-fir forests throughout the Northeast. Their white-tipped tails, which can measure six inches or more, are two-thirds the total length of their bodies.

When startled or pursued by predators, these mice use their powerful, kangaroo-like hind legs and large back feet to jump as high as two feet and as far as eight feet forward.

They will jump several times, then abruptly stop, becoming completely still. These erratic movements and a coat of fur well suited for camouflage help woodland jumping mice evade the talons and teeth of predators such as great horned owls, red-tailed hawks, bobcats, weasels, and foxes.

The woodland jumping mouse is one of the smallest true hibernators in North America, and it depends on its store of specialized fat to survive the winter. The shortened daylight and cooler temperatures of fall trigger a hormonal response, causing jumping mice to spend their waking moments eating as much as possible.

Unlike many other rodents, the woodland jumping mouse does not horde or store food; everything it finds to eat goes directly into its body. By the time
they head into their underground nests for a long winter’s sleep, these usually lean mice will have increased their weight by more than 25 percent.

In essence, a jumping mouse’s body becomes its winter larder, as it converts the majority of consumed food into brown fat, which is transformed directly to body heat throughout the winter. During hibernation, the brown fat acts like a slow-burning log in a woodstove, keeping the woodland jumping mouse’s body temperature from dropping below freezing.

To build up this fat reserve, woodland jumping mice eat grass seeds, berries, and insects, such as caterpillar larva. But more than 30 percent of the mouse’s diet comprises underground fungi, commonly known as truffles. The truffles woodland jumping mice consume in Northeast forests aren’t the same choice varieties sniffed out by highly trained pigs or dogs in Italy or France. However, the pivotal role of these specialized subterranean fungi in the forest ecosystem is worth more than their weight in gold.

According to Ryan Stephens, a small mammal and fungi researcher from the University of New Hampshire, underground fungi are essential to the health of forests “These fungi colonize the roots of trees and help them take up nutrients and water,” he said. “In exchange, the trees provide the fungi with sugars.”

These mycorrhizal fungi, as they are referred to by scientists like Stephens, are associated with most vascular plants and trees, and their role reaches beyond nutrient cycling. These fungi have been shown to help trees and plants respond to pathogens and poor environmental conditions, and to regenerate after forests are altered by such things as fire and logging.

Recent research conducted by Stephens and a team of UNH researchers in New Hampshire’s White Mountains reveals that woodland jumping mice and other small rodents, such as voles, chipmunks, mice, and shrews, play an essential role in dispersing the spores of underground fungi.

In a way, these animals are like underground pollinators. By eating subterranean fungi and then defecating in new locations, they help spread the spores, enabling new fungal networks to form with tree roots.

“Small mammals help maintain a diverse community of mycorrhizal fungi in forested systems,” said Stephens. “This is important because having a diverse fungal community can help buffer forests from disturbances, such as drought.”

I think of these hidden connections as I watch my son, holding his breath as he listens to the ground, imagining what’s below. There’s so much of our world we never see, and yet these underground interactions make our world above the ground possible.

Susie Spikol is the community program director for the Harris Center for Conservation Education in Hancock, New Hampshire. Illustration by Adelaide Murphy Tyrol. The Outside Story is assigned and edited by Northern Woodlands magazine and sponsored by the Wellborn Ecology Fund of the New Hampshire Charitable Foundation: www.nhcf.org.