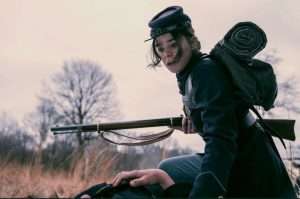 This past winter, an Apple TV+ film crew from the historical comedy “Dickinson” turned the Jay Meadow at the Jay Heritage Center in Rye, NY, into a Civil War battlefield.

The show, which stars Academy Award nominee Hailee Steinfeld as poet Emily Dickinson, spent more than two months filming around the Jay Estate for its third and final season, which is streaming now on Apple TV+. 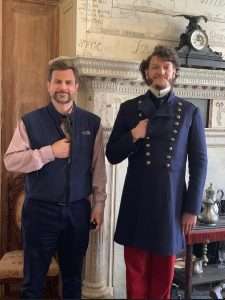 The storyline set at the Jay Estate details the relationship between Dickinson and Thomas Wentworth Higginson, an abolitionist who commanded the first Union regiment of Black soldiers and who ultimately became the co-editor of Dickinson’s early poetry collections.

More information about the series can be found in a recent NY Times article.

You can also read about the real-life history here – and stay tuned for Jay Heritage Center’s own upcoming program about the true story behind the fictional portrayal.

More information about how the crew transformed the Jay Estate can be found in this new article in House Beautiful magazine.

Photos, from above: scene from “Dickinson;” JHC Executive Director Kevin Peraino with Gabriel Ebert, the actor who plays Higginson in “Dickinson;” and Actor Chinaza Uche at the Jay Estate on the set of “Dickinson.”