When the events of 1941 pulled the U.S. into the conflict, the Navy and the Wartime Shipping Administration had a very serious need for vessels to transport war materials. This task was the duty of the country’s Merchant Marine, and all possible craft were requisitioned, including those on the Great Lakes and inland waterways.

Sailors at sea, since ancient times, have crafted all types of tales. The ferocity of a dark windswept night and the splendor of the sun descending into an endless horizon have wrought fantastic tales, which have survived for generations before the mast. One such yarn, which morphed into a fabled saga amongst seamen, was that of the Lorelei.

This sea spirit was the mythic form of a young woman who, finding herself the victim of an unfaithful fisherman, cast herself into the Rhine River in Germany. She emerged as an eternal specter, still alluringly beautiful, yet seeking to wrought vengeance on all those who took to boats. The methods of the Lorelei were that of a licentious and dissolute profligate, which certainly aided in the retelling of the tale amongst sailors.

Several years before the Second World War, George and Ira Gershwin, the wizards of Tin Pan Alley, produced a Broadway show titled, Pardon My English, based upon the legend of the Lorelei. This show was not the greatest success for the Brothers Gershwin, but its Lorelei lyrics made a lasting impression on many.

In late 1932 the New York Times opined “several of the tunes may be crooned in the privacy of one’s bathroom without the assistance of a symphony orchestra.” The New York Sun review of Pardon My English termed the show a “biological comedy.” In upstate New York, the Knickerbocker Press wrote, “it is also occasionally dirty in its lines and suggestion.” Indeed Ira Gershwin’s lyrics about the Lorelei may have precipitated that interpretation:

Back in the days of knights in armor
There once lived a lovely charmer
Swimming in the Rhine
Her figure was divine
She had a yen for all the sailors
Fishermen and gobs and whalers
She had a most immoral eye
They called her Lorelei
She created quite a stir
And I want to be like her
I want to be like that gal on the river
Who sang her song to the ships passing by
She had the goods and how she could deliver
The Lorelei
She used to love in a strange kind of fashion
With lots of hey-ho-de-ho-hi-de-hi
And I can guarantee I’m full of passion
Like the Lorelei
I’m treacherous, yeah-yeah
Oh, I just can’t hold myself in check
I’m lecherous, yeah-yeah
I want to bite my initials on a sailor’s neck
Each affair has a kick and a wallop
For what they crave, I can always supply
I want to be just like that other trollop
The Lorelei

Much like the popular song “Lili Marlene,” the legend of The Lorelei was known to many mariners during World War II, no matter what flag their vessels flew.

Industrialist Henry Ford built a manufacturing empire, based near Detroit, Michigan. Ford also built plants on the eastern seaboard, which he networked together with four specially built motorships which were constructed to maximize the dimensions of the New York State Barge Canal, which linked the Great Lakes to the Atlantic.

The Ford vessels were named for the east coast plants, Chester (Pennsylvania), Edgewater (New Jersey), Norfolk (Virginia) and Green Island in New York’s Hudson River. All these vessels were transferred to the Merchant Marine when Uncle Sam went to war, and used in coastal transport.

The United States Merchant Marine, or civilian sailors serving aboard Federal vessels, has existed since the Revolutionary War. One such merchant seaman was Curzon Scott, originally from Deposit, New York and the son of Cornelius E. Scott, a prominent attorney there.

During the First World War Curzon Scott served as a Merchant Marine officer. He was aboard a vessel which was sunk, or in sailor slang, “bumped.” Following that conflict, he found a position with the New York State Department of Public Works, and was assigned to the Binghamton office.

In 1920, as a reserve officer, Scott passed the government examination held by the United States shipping board in New York and received a license as chief mate on steam vessels of any tonnage. His wife, the former Mabel Owen, a native of Wellsburg in Chemung County, was a nurse at the Binghamton State Hospital.

In April of 1941, eight months before the attack on Pearl Harbor, Curzon Scott received a commission and re-entered the Merchant Marine. He was aboard the merchant vessel Pine Ridge, and “bumped” a second time when they ran aground near Nova Scotia, victims of saboteurs who had shifted channel buoys. The ship and everyone aboard eventually reached port safely.

Curzon Scott was next assigned as Chief Mate on the former Ford vessel Green Island, under the command of Master Josef Anderson. On May 6th, 1942, Scott was taking his turn at the helm of the Green Island while transiting the Caribbean about 80 miles southwest of Grand Cayman Island on a clear day.

Suddenly, the Green Island was struck about six feet below the waterline, between the fourth and fifth cargo hatch, by a torpedo fired from the Nazi submarine U-125. The resulting explosion nearly broke the out-of-place canal boat in half, but no one aboard was injured. The pilot in command, Curzon Scott issued the order to abandon ship, and the full complement of 22 men evacuated to the two life boats. 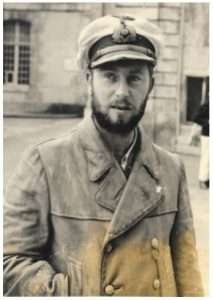 Upon his return to Upstate New York, Scott detailed his experience staring down the surfaced sub’s gun barrel to the Binghamton Press thus, “After the lifeboats were launched, and before the submarine commander had time to ask for his information, I asked: “Have you got the third verse of the Lorelei aboard?”

The U-125 was commanded by Kapitanleutnant Ulrich Folkers, who had been awarded the Iron Cross, and had sunk four vessels previously. Scott continued with his retelling of his encounter with the Nazi Commander, “I told him that I’d been bumped three times and that I was supposed to add a new verse of the Lorelei every time — that, furthermore every member of my crew could sing two verses verbatim.”

Scott signaled his name and rank, and appealed once more “to send me the third verse” of the Lorelei if it were aboard. This elicited a response from the submarine commander who answered “No” to having the requested third verse. Scott was pleased to relate Commander Folkers’ next action, “he stood on the bridge and saluted me and motioned that we were to shove off. The ship sank in a short time.”

Curzon Scott concluded with his feeling “that he believed the crew of the Green Island was saved by his humor.” Certainly it helped that Commander Folkers was apparently familiar with the legend of the Lorelei.

The survivors of the Green Island, and their two lifeboats were picked up on May 7 by the British merchant steamer Fort Qu ‘ Appelle, which was sailing on its maiden voyage. The ship had recently been built in Vancouver, British Columbia, and launched in March, having transited the Panama Canal on its way to the United Kingdom by way of Halifax, Nova Scotia. The Fort Qu ‘ Appelle landed the Green Island merchant sailors at Kingston, Jamaica on May 9, 1942, where they were repatriated.

Curzon Elliott Scott did not survive the war. He had long been under care for a heart ailment, and succumbed to a heart attack in Binghamton. The April 19th, 1943 Binghamton Press wrote that the, “43-year-old merchant- mariner and native of Deposit whose ability to grin and sense of humor probably saved the lives of 22 crewmen of a 3,000-ton motorship last May when it was torpedoed by a German submarine in the Caribbean Sea.”

Ulrich Folkers also did not survive the war, perishing with all aboard the U-125 when it was sunk by the Royal Navy in the North Atlantic, ironically a year to the day after the sinking of the Green Island, on May 6th, 1943.

The new British merchant vessel Fort Qu ‘ Appelle, never made it to Halifax, being sunk in the busy shipping lanes approximately 250 miles south and east of the Port of New York by another Nazi U-Boat (U-135). An unfortunate outcome resulted for many involved in a single wartime incident in the warm Caribbean, lending more credence to the lethal legend of the Lorelei.