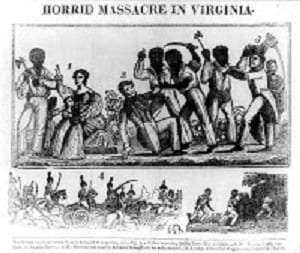 Perhaps because forcing people to work for you for free was so dependent on violence, the South was continuously racked with fear – fear that the people one kept enslaved (or those enslaved by others) would rise up against them.

To assuage these fears each state passed laws, known to us as the Slave Codes, that regulated the relationship of enslaved people and the free world. The Virginia Slave Code of 1705 was a model on which other laws throughout the South were built. Here is some of the text – note that those who were previously indentured servants, so long as they are not Christian, were also hereafter slaves:

“All servants imported and brought into the Country…who were not Christians in their native Country…shall be accounted and be slaves. All Negro, mulatto and Indian slaves within this dominion…shall be held to be real estate. If any slave resist his master…correcting such slave, and shall happen to be killed in such correction…the master shall be free of all punishment…as if such accident never happened.”

In part because slavery was so important to the economic well being of those in charge in the South, and in part because of growing abolitionist attacks on the slave system, but mostly because of the threat of slave revolts such as Nat Turner’s in 1831, in the years leading up to the Civil War the slave codes become more oppressive.

States in the North had provided for the abolition of slavery in a series of laws passed up to 1804 (although there were still “legal” slaves into the 1860s in New Jersey). Congress banned the importation of slaves in 1808, and the South became increasingly pro-slavery, until the Civil War forced them to accept Abolition.

So it was that slavers feared their slaves, and northerners, would sooner or later rise up against them. When that seemed to have happened at Harpers Ferry, the south militarized. 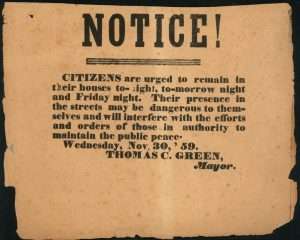 In Harpers Ferry, and presumably in other communities nearby, armed men patrolled the streets at night arresting anyone they did not know and who did not seem to them to have a legitimate purpose for being out at night. Cadets of the Virginia Military Institute were armed and marched to Harpers Ferry.

Virginia Governor Henry A. Wise ordered Brown’s Sharps rifles distributed to locals. He commissioned militia companies to patrol Charles Town and Harpers Ferry, and announced that all Virginians should be ready for military action.

“I shall implore the people to organize and take arms in their hands and to practice the use of arms,” he directed, “and I will cause depots to be established for fixed ammunition along our borders and at every assailable point.”

The rumors of an all-out attack on the slavers were right – in a sense. Just 18 months later the Civil War began.

On November 15, 1859, during the Leonids Meteor Shower, a particularly large meteor exploded with such force that it was seen and heard from Albany to Virginia. It was, one journalist reported, “a series of terrific explosions, which were compared to the discharge of a thousand cannon.”

Soon, the slavers in Virginia would know the sound of thousand cannon – first hand.