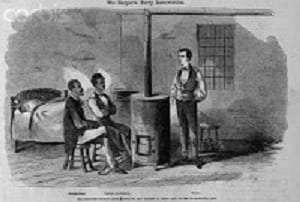 While John Brown waited to hang for leading the raid to free people enslaved near Harpers Ferry, Virginia, his compatriots were led to the Charles Town court and tried before Judge Andrew Parker.

Edwin Coppoc, who served under Brown’s command in the engine house, was tried on the same charges as Brown: conspiracy to incite a slave insurrection, treason against the State of Virginia, and first degree murder. His trial began the day before Brown was sentenced and ended the next day with convictions on all counts. Before he was sentenced, Virginia Governor Henry A. Wise appealed to the Virginia legislature to reduce his maximum sentence to life in prison, apparently on account Coppoc was a Quaker. That request was rejected.

The two African American prisoners, Shields Green and John A. Copeland, were tried on the following day, November 3, 1859. Their defense lawyer, George Sennott, used the recent Dred Scott Supreme Court decision to convince the court that because the defendants were not considered citizens of Virginia or the United States, they could not be found guilty of treason. Green and Copeland were convicted on the other two counts just the same.

Governor Wise believed that John Cook (who had made it to Pennsylvania before being captured by a fugitive slave hunter) and Albert Hazlett (captured in Newville, PA) were part of a conspiracy with Northern Republicans like New York Senator William Seward and Ohio Representative Joshua Giddings. Wise tried to have Cook and Hazlett tried in a nearby federal court which would have more investigative power, but the change of venue was rejected. Cook was tried and quickly convicted.

The trails of Aaron Stevens and Albert Hazlett were delayed until the next scheduled court session in February, 1860, so on November 19th Cook, Coppoc, Green and Copeland were brought before the bench for sentencing.

The four men would all hang on December 16th.