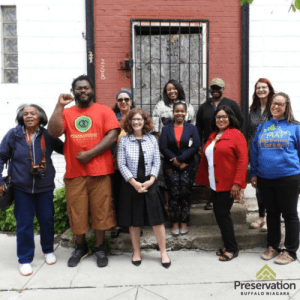 The Landmark Society of the Niagara Frontier and the Preservation Coalition of Erie County merged in 2009 to become Preservation Buffalo Niagara (PBN), building on their 30-year history to ensure that the Buffalo region would have a strong, effective, and professional preservation organization.

A change in leadership in 2015 set the organization on a renewed trajectory, expanding the staff, quadrupling the annual organizational budget, nearly doubling membership, and adding in a wide range of programming designed to make preservation relevant to a much wider cross-section of people.

PBN’s diligence, perseverance, and dedication to creating an anti-racist preservation movement is what makes them an exceptional and unparalleled model for preservation in the future.