One of McManus’s earlier activities in this regard was as a member and later President of the National Democratic Club of New York, which dated from 1834 and was credited with swinging the 1844 Presidential election to Democratic candidate James K. Polk, when as the Empire Club it helped carry New York State to James K. Polk over his opponent Henry Clay. 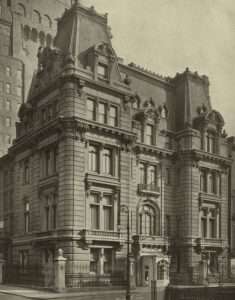 The National Democratic Club was an active Club for New York Democrats throughout the late 19th and twentieth centuries (Tammany boss Richard Croker was said to have lived there after being thrown out by his wife).

Franklin D. Roosevelt and Harry S. Truman were one time members, and up until the 1970s they had an attractive clubhouse at 233 Madison Avenue, which today is the Polish Embassy. Having become largely a lunch club for businessmen in the garment center, it was decided in the height of the City’s fiscal crisis in 1974 that the club’s townhouse should be sold, which it was for $1 million dollars (today it would probably sell for between $50 million and $100 million).

A meeting was then held at which the majority of 100 or so members, led by insurance executive Alan Titunik, wanted to dissolve the National Democratic Club and distribute the Club’s remaining funds to each member (approximately $10,000 each).

McManus with a small group that included James Hazley, Tommy Cannon and a few other long-time members, objected, arguing that this historical club should continue for the purpose for which it had always existed — promoting social interaction among Democrats.

It appeared that those favoring complete dissolution would prevail until a young lawyer who was McManus’s counsel pointed out that complete dissolution of a not-for-profit corporation would require approval of the New York State Attorney General, which might not be forthcoming for the purpose of enriching the remaining members.

A compromise was therefore worked-out, whereby it was decided that the National Democratic Club would remain in existence, but members who wanted to could resign and their interest in the Club’s assets would be redeemed out.

It was believed that such a transaction would not require the Attorney General’s approval. Approximately 90% of the existing members of the Club elected to resign, receiving payments of approximately $7,500 each. About $75,000 left in the Club’s treasury was to be used for club purposes by the remaining 10 members, who elected Jimmy McManus President.

The Club continued to meet and have dinner at Richie Brew’s, a restaurant on 34th Street, every month for approximately two years. They had difficulty determining what the role of the Club should be and it soon became moribund for about ten years. Then, Alan Weintraub, a JP Morgan Chase executive whose superiors had indicated they’d like to see executives have active involvement in civic organizations, agreed to replace McManus as President. 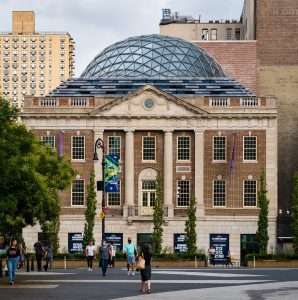 It was decided that the Club should take an active role in promoting landmark status for the last Tammany Hall building on 17th street. The members of the Club then discovered that there had for some years been an active effort by community groups in the 14th Street area to obtain a landmark designation, but that some Landmarks Preservation Commission staff and the building’s owner opposed the designation.

At the Landmarks Commission hearing the overwhelming majority of speakers argued that since Tammany Hall was a significant part of the City’s history, the attractive building which had opened in 1929 at the height of Tammany’s power, should receive landmark designation.

A representative of the National Democratic Club and the McManus organization also spoke in favor of land-marking. Showing a picture of Mayor Jimmy Walker and Governor Al Smith on the day the building opened, James McManus stated that in 1929 the New York State Democratic Party, and much of the nation, had looked to Al Smith’s administration and its progressive social welfare policies for inspiration as to what government could do.

The landmark designation for the building was overwhelming approved, but to the chagrin of many, the designation only applied to the building’s exterior and the developer was allowed to tear out the interior, including its Roosevelt Auditorium.

This is part of a series about the life and times of James McManus, one of the last Tammany district leaders in New York City. You can read the entire series here.