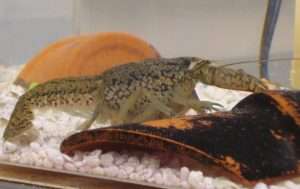 Sometime in the 1990s, a mutant crayfish able to conquer and degrade aquatic systems emerged as a result of secret German experiments gone awry. The marmorkreb, a.k.a. marbled crayfish (Procambarus virginalis), is a destructive new species that first appeared aquariums in Germany. However, it’s more likely the result of too much inbreeding in captivity, rather than some mad-scientist scheme, that led to their mutation.

They are now here, and your help scouting for them is invaluable.

Perhaps the only amusing thing about these nasty aberrations of nature is the mild squabbling as to how one should describe them. Experts disagree on whether the new organisms are mottled, freckled, speckled, spotted, variegated, or something else. Germans insist these crayfish are marmorated, a term
with no relation to the word marmalade, which incidentally is marmorated. Here in North America we’ve decided they are marbled, although marmorkreb still sneaks into polite conversation.

These modified crayfish are mid- to large sized, from 10 to 15 cm (4-6 inches). Typically they are olive to dark brown, but infrequently appear reddish, blue or tan just to throw us off. Also, their claws are narrow, with tinier pincers than those of native crayfish.

Either to compensate for their “tiny finger syndrome” or for no reason in particular, marmorkrebs reproduce so fast they make rabbits look like celibate monks. The secret to mottled crayfish fecundity is that a female lays viable eggs – around 700 at a pop – without the hassle of finding a mate. All her
offspring are females, which soon mature and begin cloning themselves.

This talent, known as parthenogenesis, is occasionally seen in insect species but seldom in larger organisms. It saves them energy they would otherwise waste scrolling through Tinder and Bumble, or however crayfish normally find mates. Being parthenogenic also means that a lone individual can beget her own kingdom.

They are generalists, thriving in a wide range of habitats from lakes to rivers to marshes and mud puddles. Fast-moving water does not seem to be a problem for them. They’re cold-hardy but love the heat, too. Not surprisingly, marmorkrebs eat a host of aquatic life including algae, plants, amphibians
and snails. They burrow into banks, which raises turbidity, releases nutrients from sediments into the water, and accelerates erosion.

A quick web search reveals alarming headlines from The New York Times, The Atlantic, and other major news outlets claiming that mottled crayfish are taking over Europe. It’s not to the point that citizens are being kicked out of their homes by marauding arthropods, but marmorkrebs are becoming a real
scourge in parts of Germany, the Netherlands, and Italy. The island nation of Madagascar is especially hard-hit, in part because the crayfish are seen as a food source and sometimes deliberately spread.

Unfortunately, marbled crayfish are sold on the web and even in some pet stores in the United State. While marmorkrebs are known to be widespread here in the pet trade, at the moment there are no reports of wild populations in New York State. This is where public outreach and citizen science come in. The
invaders are dispersed when poorly informed aquarium owners release excess crayfish from their tanks into surface waters, and when anglers use them as bait. Populations quickly boom, at great cost to native aquatic species. It’s easier to get the public on board when they learn mottled crayfish will ruin
the swimming, fishing, and duck hunting at their favorite waterway.

The Michigan DNR resource also states “owners of marbled crayfish should humanely dispose of specimens in their possession and clean tanks thoroughly to assure no eggs or young remain.” It notes that flushing does not necessarily kill crayfish and can potentially introduce it into a water system, and recommends freezing crayfish for at least 48 hours or submerging them in ethanol as humane killing methods.

Report possible sightings of marbled crayfish or other invasive species in the wild to the New York iMaps Invasives site.