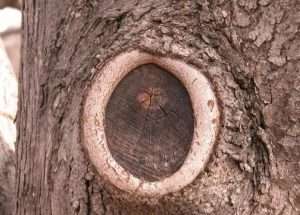 When clients call about decay in large older trees, every so often it’s necessary to respond that I’m not interested in hearing any lip from them. I do this respectfully of course.

It’s a frequent misconception that the roll of callus tissue or “lip” that trees produce at the margins of a wound will cause, or at least accelerate, trunk rot by catching and holding a small amount of rainwater.

It makes perfect sense to us that if an open tree wound is allowed to stay wet for longer, it will decay faster. We all know that a stack of wood exposed to the elements will turn punky in a few years, whereas if it’s kept in a dry shed it can last indefinitely.

Strange though it may seem, tree decay is not a function of whether or not an open wound is protected from the weather. No matter how fastidiously one covers a large trunk injury, wood at the center of a tree gets more than enough moisture from the surrounding live tissues (cambium and sapwood) for
decay organisms to thrive. In fact, letting a wound get soaked by the rain may actually halt the progress of rot, as those agents can’t grow in saturated, anoxic conditions.

Unlike a pile of inert lumber, trees actively defend themselves against decay with protective structures and processes which are analogous in some ways to our immune systems. Since trees don’t always succeed in these endeavors, let’s look at how “treemunity” works and why it sometimes fails.

Thanks in large part to the late Dr. Alex Shigo of the US Forest Service, we know a lot more about the way trees protect themselves than we did before about 1970. When an injury occurs, a tree converts a portion of its stored sugars to make defensive compounds. These chemicals are then deposited in very
precise patterns internally around a wound. Shigo was the first to document this response, which he called the compartmentalization of decay in trees, or CODIT.

The four different types of chemical walls are readily visible, though they can only be seen after death (of the tree, I mean) when its wood is sliced open. The first wall cements shut the water-conductive xylem tubes above and below an injury in a roughly horizontal plane. The next is a semicircular arc which
follows a portion of an annual ring just inside the wound. The third kind of wall is radial, isolating damage on either side in two planes which converge at the centre of the trunk. The fourth and strongest wall is chemically superior new tissues that are laid down after an injury. This includes subsequent years’
growth as well as callus tissue.

I highly recommend a fabulously illustrated booklet that shows how these four biological walls develop. The stunning color plates border on psychedelic, so if you’re not into tree biology, you can still kick back some evening with a relaxing product of your choice and enjoy a trip through the pages. You can
find Dr. Shigo’s inspired booklet online (pdf).

Wound closure, sometimes called “healing over,” is unrelated to the extent of internal decay that will occur – this depends on how effectively a tree can wall-off infections. Closure is good because the vascular system no longer has to detour around a wound, but it doesn’t protect against fungi if the tree
is too weak to chemically protect itself.

The success of walling-off depends a lot on species. Slow-growing hard maple and white oak, for example, typically generate some of the strongest CODIT responses. Poplar and willow, on the other hand, barely manage any walls, figuring (I assume) they can outgrow the decay agents.

Overall tree vitality is another important factor. We know that when we are run-down, we’re a lot more vulnerable to illness. Even a hard maple won’t be able to form strong chemical barriers if it has suffered past root injuries, soil compaction, repeated defoliations or drought stress. By definition, a landscape
tree surrounded by grass (its arch-enemy) is stressed compared to a forest-dwelling cousin. Street trees have it worse yet, faced with reflected heat, limited root space, and road salt.

The size of a wound is also critical. Happy, healthy trees can have their defenses overwhelmed by large wounds. We know that many times, trees lose their battle against decay.

In addition to fighting the forces of rot, a tree also uses its internal chemistry set to fight insect pests, making compounds known to scientists as “Bad Tasting Stuff” to repel them (insects, not scientists). But these designer chemicals aren’t perfect – just look at what tent caterpillars and LDD (formerly gypsy) moth caterpillars can do.

It has recently come to light that trees have an early-warning system. Apparently they can signal one another about what type of pest has arrived on the scene, communicating by way of underground root grafts as well as through beneficial symbiotic soil fungi called mycorrhizae. Some biologists think
airborne chemicals also carry messages related to pests and diseases.

You can help maximize your tree’s “immune system” by watering during dry spells, mulching out to the branch length or dripline (best not to have grass under your trees!), and by keeping vehicles away from the root zone. In return, your tree will help keep you in optimal health by offering shade, beauty and
companionship.