Numerous intellectuals and political leaders (Winston Churchill and John Maynard Keynes in Britain; Woodrow Wilson and Alexander Graham Bell in the United States) came to accept the idea that society should strive for the improvement of the human race through governmental intervention. 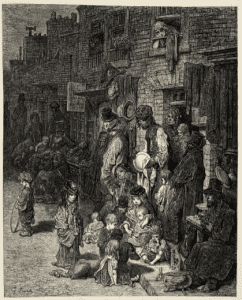 The dual processes of industrialization and urbanization during the nineteenth century made life in mega-cities unbearable for many of their inhabitants. Once a center of civilization, the city seemed to fall back into a hostile setting. In 1829 Robert Southey spoke of London as a wilderness. Other authors pointed to the city’s “savage” environment, comparing it to an African jungle.

In his In Darkest England and the Way Out (1890), William Booth argued that there was a darkest England in parallel to darkest Africa. Within a stone’s throw of cathedrals and palaces, he suggested, one may discover “similar horrors to those which Stanley has found existing in the great Equatorial forest.”

For many authors the metropolis symbolized the desolate nature of modern life. Documentary literature became a statement of social commitment. The outstanding work of this type was (William) Blanchard Jerrold’s London: a Pilgrimage, published in 1872. The word “pilgrimage” impressed upon the reader the moral significance of such a journey. 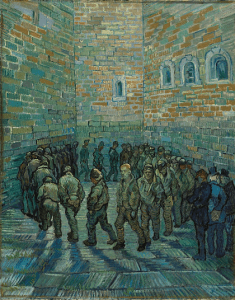 Illustrated by Gustave Doré, the book is a hellish vision of urban deprivation. Emphasizing the contrast of affluence and apocalyptic misery, it captured the public mood at the time. Vincent van Gogh’s admiration for these illustrations led him, in 1890, to paint a version of Doré’s haunting image of dehumanized convicts circling a bleak exercise yard.

Faced with urban degeneration, the late nineteenth century was struck by panic. Society’s well-being was at stake. Darwin’s thinking provoked an existential debate which found expression in literature. In a world where religion and science had fallen into open conflict, writers tried to make sense of an order in which traditional interpretations were no longer accepted.

Thomas Hardy shared the conviction with numerous fellow authors (Joseph Conrad, D.H. Lawrence, T.S. Eliot, Yeats, Ezra Pound, and others) that the modern era displayed a pervasive decline in the quality of social life and in the standard of individuals who participated in it. Hardy’s The Return of the Native (1878) is a retreat to an era that predates urbanization and expresses a nostalgic longing for the “wholeness” of pre-modern Wessex. In his late fiction the reader is presented with characters that are at the mercy of habitat and heredity.

Degeneration was a key concept of the 1890s. Early European physicians had searched for the one “miracle” medicine that would cure a range of epidemic diseases. In fear of new barbarisms, the late nineteenth century was in pursuit of a similar panacea to initiate regeneration. Eugenics promised a solution for the paradox that was observed by many social critics: on the one hand a firm belief in progress; and, on the other, the depravity of growing numbers of city-dwellers.

Plato, in book V of Republic, had advocated selective breeding to secure the public good. Towards the turn of the century that line of thinking gained favor among European and American politicians and social observers. Controlling heredity was the means by which society could be invigorated.

The powerful American eugenics movement was rooted in the biological determinist ideas of Francis Galton. Early proponents of eugenics believed that, through selective breeding, the human species should direct its own evolution. They tended to believe in the genetic superiority of Germanic and Anglo-Saxon peoples; supported strict immigration and anti-miscegenation laws; and advocated sterilization of the disabled, maimed, and “immoral.”

In 1906 physician, nutritionist, and Adventist J.H. Kellogg provided funding to launch the Race Betterment Foundation in Battle Creek, Michigan. That same year the biologist Charles Davenport took up the directorship of the American Breeder’s Association (ABA), one of the country’s first eugenics bodies. It was formed to investigate heredity in the human race and stress “the menace to society of inferior blood.”

Five years later Davenport founded the Eugenics Record Office (ERO) in Cold Spring Harbor, New York, being sponsored by the Harriman railroad fortune and the Carnegie Institution. In years to come, the ERO would lobby for solutions of dealing with the “unfit” in society which included immigration restriction, sterilization, euthanasia, and segregation. More radical members entertained the idea of extermination. Well into the 1920s, the ERO remained one of the principle drivers of the eugenics movement.

Public acceptance of eugenics allowed for legislation to be passed. Beginning with Connecticut in 1896, many states enacted marriage laws prohibiting anyone who was “epileptic, imbecile or feeble-minded” from marrying. Indiana became the first state to enact sterilization legislation in 1907, followed by Washington and California in 1909. New York’s sterilization law was passed in April 1912 and repealed in 1920. During that period forty-two sterilizations took place, almost all on women who were considered mentally ill.

With the passage of the Immigration Act of 1924, eugenicists for the first time were consulted in the Congressional debate as expert advisers on the threat of “inferior stock” from Eastern and Southern Europe. The act also strengthened existing laws prohibiting race-mixing.

In 1869 Benjamin Ward Richardson proposed the construction of a lethal chamber for the “painless” slaughter of stray dogs to the Royal Society for the Prevention of Cruelty to Animals (RSPCA). He constructed a trial model in 1878. Richardson’s original blueprints show a large paneled chamber serviced by a tall slender tank for carbonic acid gas and a heating apparatus. In 1884 London’s Battersea Dogs Home became the first institution to install his gassing device. In the 1880s and 1890s, brought in some 40,000 stray dogs in a single year.

Richardson introduced the concept of the lethal chamber at a meeting of the Royal Society of Arts in December 1884, and in March 1885 he published a paper in the American journal The Popular Science Monthly with the title “The Painless Extinction of Life.” By the turn of the century a number of charitable animal institutions were using the chamber. The concept of the “lethal chamber” was in common vernacular by the turn of the century. When the phrase was mentioned, it needed no further explanation. Everyone understood what it meant.

If such methodology could be applied to the “gentle” extinction of canines, why not apply similar means in the urban battle against the corrupt and debauched? The possible introduction of the lethal chamber as a social “solution” was introduced into eugenicist discourse during the last decennium of the century. There was a direct link to literature.

In Britain, Bernard Shaw’s Man and Superman (1905) and H.G. Wells’s The New Machiavellian (1911) were suffused with the language of de-vitalisation and regeneration. The term “lethal chamber” appears regularly. As so often, D.H. Lawrence showed little restraint discussing this troubling subject (letter to Blanche Jennings; October 9, 1908):

If I had my way, I would build a lethal chamber as big as the Crystal Palace, with a military band playing softly, and a Cinematograph working brightly; then I’d go out in the back streets and main streets and bring them in, all the sick, the halt, and the maimed; I would lead them gently, and they would smile me a weary thanks; and the band would softly bubble out the ‘Hallelujah Chorus.’

Richard Austin Freeman was a Tory supporter of eugenics and an outspoken opponent of immigration (the immigrant represents “Sub-Man”). In 1914 he published his detective novel A Silent Witness of which chapter five is entitled “A lethal chamber” – but there is an earlier American literary reference.

Brooklyn-born student Robert W. Chambers spent the period between 1886 and 1893 in Paris where he joined the avant-garde at the École des Beaux-Arts and the Académy Julian. On his return to New York, he devoted his time to writing supernatural fiction. Aesthetic fashion of the late nineteenth century was cloaked in yellow (the “Yellow Nineties”). A color of stigma, yellow also suggests decay and (mental) illness. Chambers combined both interpretations. In 1895, he published King in Yellow (1895), an Art Nouveau collection of horror stories.

The collection’s most representative tale is “The Repairer of Reputations.” Set around 1925 in New York, the city is ruled by a merciless authoritarian regime. Immigration is brutally controlled and suicide legalized if not encouraged with the introduction of city-wide government-sponsored “Lethal Chambers.”

The juxtaposition of social degradation and insanity with a regime of regeneration made considerable impact at the time. The lethal chamber was a (literary) metaphor applied in Anglo-American eugenicist thinking long before gas chambers were used as a method of execution for condemned prisoners in the United States (beginning in the early 1920s) or as an instrument of mass murder associated with the Nazi holocaust. 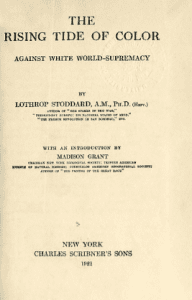 Born in Brookline, Massachusetts, Theodore Lothrop Stoddard was a Harvard graduate. He was a member of the American Eugenics Society, a founding member (along with Margaret Sanger) of the American Birth Control League, and a Klansman. In 1920 he published his seminal book The Rising Tide of Color against White World-Supremacy in which he developed his theory of white superiority and the need to “improve” the population through selective breeding.

President Warren Harding was one of his admirers and, in 1921, used the book to support his segregationist views in a speech to a mass audience in Birmingham, Alabama. Adolf Hitler liked the book too. From Stoddard’s next publication The Revolt Against Civilization: The Menace of the Under-Man (1922) the Nazis borrowed the term “Untermensch” and integrated it in their poisonous discourse about race. During the first months of the Second World War, the author worked as a journalist in Germany where he interviewed several prominent Nazi officials. 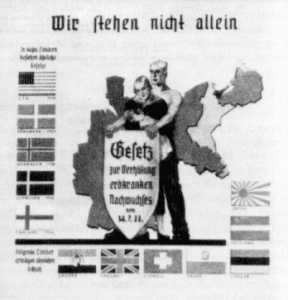 Eugenics was promoted in Britain and the United States long before its “scientific” programs were introduced by the Nazis. There was a consensus between their race policies and those of Anglo-American eugenicists. By 1933, California had subjected more people to enforced sterilization than all other U.S. states combined. Their experience was communicated to German scientists and medical professionals from which the Nazis developed their own practices.

A 1936 Nazi propaganda poster served as justification for the nation’s compulsory sterilization law by pointing to other countries – including Britain and America – that had enacted or were proposing similar legislation: Wir stehen nicht allein (We do not stand alone).

The Rockefeller Foundation funded various German eugenics programs, including the work done at the laboratory of Otmar von Verschuer, the geneticist (of Dutch descent) who was an advocate of compulsory sterilization programs under the banner of ‘racial hygiene.’ One of his students was Josef Mengele, the war criminal who would be employed at Auschwitz to direct “scientific” experiments on prisoners.

Mengele was a member of the team of physicians who selected victims to be killed in lethal chambers and one of the doctors who administered the gas.