A small, raised dot of red on a document—is it sealing wax? Not always. In some cases what looks like sealing wax is actually a wafer seal, sealing wax’s cheaper cousin. Wafers are thin, flat, baked adhesive discs made from starch, binders, and pigment that were used for joining and sealing documents during the 17th through 19th centuries in Great Britain and other European countries and their colonies. Although they were usually red in color, they were produced in a variety of colors and sizes according to their intended purpose. 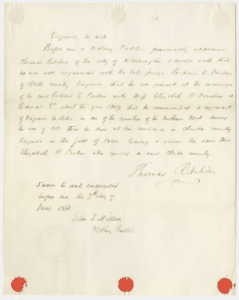 Even in the first decades of the new United States, government clerks and officials had access to many different ways to hold documents together, including ribbon, pins, thread, sealing wax, and wafers. With a store of silk ribbon or cotton tape nearby, they could easily attach documents to each other by cutting two slits in the paper and feeding a ribbon through them. This would let them quickly bind several sheets together into a pamphlet, or sew sheets together to create a longer piece of paper. 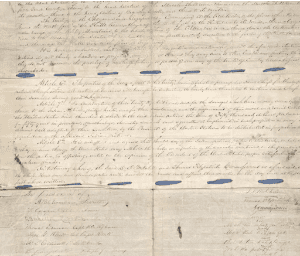 Before the invention of stapled bindings, the “pamphlet stitch” was common to sew short texts together — though most used plain thread, not silk ribbon. After this treaty was printed, the sheets were folded into pages, and the pages were sewn together to form a pamphlet. 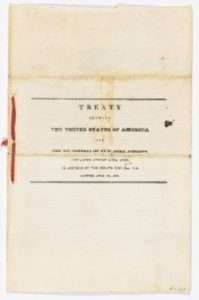 Some documents were attached or repaired by even simpler methods: threading a needle with a piece of linen thread, and sewing a torn document back together, or attaching papers with a loop of thread, as shown in this heavily-worn fraktur. 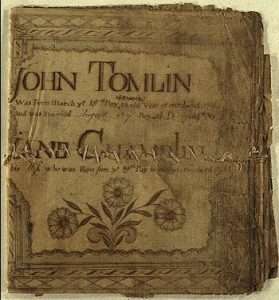 And last but not least, red tape! While red tape may be used in the metaphorical sense these days, it used to refer to literal red tape: a narrow ribbon made from cotton or linen, dyed red. This was used by government clerks for all sorts of purposes, from tying bundles of related papers together, to sealing official documents, to tying shut envelopes.

Photos, from above:original red tape keeping a bundle of documents together; Treaty of Paris, 9/3/1783; wafer seals on land bounty application from 1851; treaty is composed of several sheets of paper sewn together; copy of the Treaty Between the United States of America and the Six Nations of New York Indians; illustrated family record (Fraktur) found in Revolutionary War Pension and Bounty-Land-Warrant Application File W6302, for John Tomlin, Virginia provided by National Archives