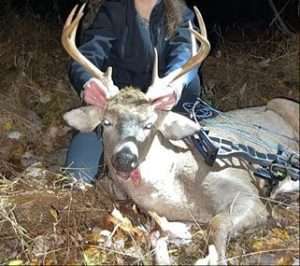 During the late summer and early fall, an outbreak of Epizootic Hemorrhagic Disease (EHD) led to the death of a significant number of whitetail deer in parts of New York State.

On Nov. 2, Environmental Conservation Officer Palmateer received information from a Catskill, Greene County, NY family about a youth hunter who shot a buck with bow and arrow a buck that had deformities on its hooves.  The family reported that it looked like the hooves were starting to detach from the deer.

The Officer spoke with DEC Wildlife Pathologist Kevin Hynes, who advised that these symptoms are historically indicative of deer that has survived the EHD virus. Hynes requested the deer be brought in for testing and the family donated the deer and gut pile to DEC.

ECO Palmateer transported the deer to the Wildlife Health Unit in Delmar, where staff tested the spleen and hooves and found the presence of the EHD virus in both.

This is the first deer in New York State to be confirmed as an EHD survivor.

For more information on EHD, visit this DEC website.