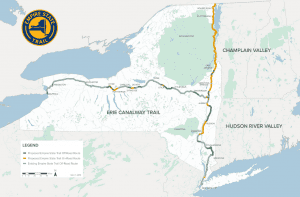 The Hudson River Valley Greenway (HRVG) and New York State Office of Parks, Recreation and Historic Preservation (OPRHP) have announced the completion of two projects to improve a total of 4.2 miles of the Empire State Trail (EST) in Waterford and Cohoes.

In Waterford, 1.2-miles of the Champlain Canalway Trail were rehabilitated through a partnership between the HRVG and Saratoga County. This 20-year-old trail section runs north from Route 32 in the Village and Town of Waterford. Saratoga County constructed a new stonedust surface, safety fencing, and enhanced trailheads were incorporated to facilitate the publics’ use. The HRVG provided $275,000 through a cooperative agreement with Saratoga County to fund the project, which began in September.

In Albany County, a 3-mile section of trail in the City of Cohoes running northwest to the Town of Colonie is being repaved by the OPRHP. OPRHP will also update safety fencing, signage, and road crossings. This segment of trail is part of the Erie Canalway Trail and is also referred to as the Mohawk-Hudson Bike-Hike Trail. The $710,000 project has begun this month and will be completed in the spring of 2022.

These trail segments are part of the EST, a 750-mile bicycling, walking, and hiking route that runs from Buffalo to Albany along the Erie Canalway Trail, and from New York City through the Hudson and Champlain Valleys to Canada.

Detailed information including trail segment descriptions and an online map depicting the trail route, designated parking areas, and nearby attractions is available on the EST website.

Additionally, interested trail users can order a free large format, printed Empire State Trail map by submitting an email with their name and mailing address on the website’s Contact Us page.