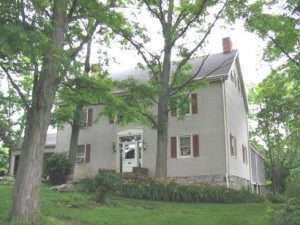 They were among the earliest settlers in Beaver Dam (now Berne, Albany County) and settled on choice valley land.

Piter’s son Johannes Fischer built by 1790 what may be the oldest house in Berne. A wagon road from the Weidman saw and grist mills at Fox Creek Falls in Berne to the Altamont-Schoharie Road passed in front of the house (now Tom Wood’s Hill Road). Farmers on their way to or from the mills could spend the night there and the home also had a small store.

The town of Rensselaerville was taken from Watervliet in 1790 and included all of Western Albany County above the Helderberg Escarpment. The Fischer home was the site of the first town meeting.

Johannes Fischer was among the richest men in Berne. In the 1800 Census he was reported to own eight enslaved people, by far the most in the town. He built a brick building to house those he kept enslaved. 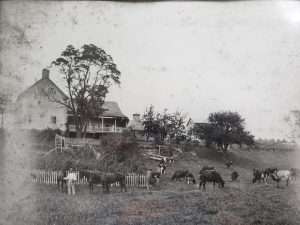 In 1826, Daniel Simmons started an axe factory in Berne and soon enlarged the factory to occupy four buildings below the bridge in the hamlet of Berne, powered by water.  Many of the wealthiest men in Berne invested in Simmons’ axe works, which once employed 200 men. The use of large quantities of charcoal gave employment to many more of the local inhabitants. High transportation cost however, inspired a move of the factory to Cohoes, and Berne investors took large losses.

Simmons bought the Fischer farm, which he occupied with his brothers, Baltus and Jonas. He also had erected in the hamlet the building later used by E. M. Shultes as a tavern.  In 1832 Daniel married Elizabeth Osterhout of Berne, NY, but she died the following year and three years later he married her sister.

Very early in the 19th century Jesse Wood from Long Island settled in the eastern part of Berne, where he became a prominent citizen. He was a colonel in the War of 1812 and later Town Supervisor, before being elected as a member of the NY State Assembly. In 1837 he sold his homestead and moved to the former Fischer farm. His adopted nephew, John M. Wood, was the father of Thomas J. Wood, later one of the town’s leading citizens (A New York State Historical Marker about him stands in front of the property; though this would have more appropriately commemorated Johannes Fischer.) 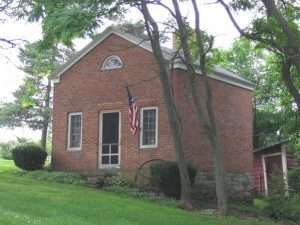 The Wood Family Burying Ground, the family burying ground of Jesse Wood, is also on the Berne – Knox Road. The earliest extant stone dates to 1848.  Also buried there is Jesse D. Wood, son of John M. & Orpha, who served in Company C of the 177th New York Volunteers during the Civil War and died at Port Hudson, La. on Aug 14, 1863, three days after his 17th birthday.  There is also a grave of an unnamed enslaved person behind the burying ground, outside the fence.

In the mid-1950s, the house was acquired by John E and LuLu Mae Wood Schultz. Lulu was the daughter of Carrie Lyons and Edward Miller Wood, son of Thomas J. Wood.

Dr. Allen Stranahan purchased the property in 1968 and sold it in 1972. The long driveway was named Stranahan Lane after him.