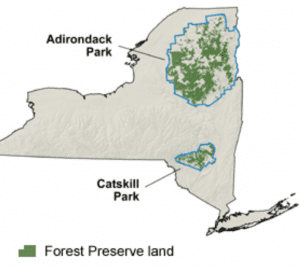 New York State Department of Environmental Conservation (DEC) has announced the creation of new coordinator positions to help lead efforts to promote sustainable use of public lands in the Adirondack and Catskill Forest Preserves.

Proposed by the High Peaks Strategic Advisory Group (HPAG) and aligned with Catskills Advisory Group (CAG) discussions to date, these new DEC staff positions are expected to help coordinate efforts proposed and undertaken with the multiple communities and regions that comprise the Adirondack and Catskill Parks to better guide efforts to address the unique problems caused by the uptick in visitors to the two Forest Preserves.

“As more New Yorkers discover the beauty of the Adirondacks and Catskills, DEC continues to build upon our ongoing efforts to protect these unique natural resources by working with our partners to address the increase in visitation we’ve seen over the last year and the last decade,” DEC Commissioner Basil Seggos said in an announcement of the new positions.

During the ongoing COVID-19 pandemic, visitors flocked in high numbers to State Parks and lands in search of respite outdoors. However, even before this latest rise in use, the last several years have seen significantly increased visitation to destinations in both the Adirondack and Catskill Parks, spurred in part by social media and an increased appreciation of the outdoors.

DEC launched HPAG in 2019, and CAG in 2020. Each of the advisory groups is comprised of stakeholders with experience in local government, recreation, natural resource protection, business, tourism, and other areas.

The coordinator position fulfills a recommendation included in the final HPAG report issued earlier this year and is aligned with CAG discussions, as this group works to finalize its own interim report of recommendations.

In these roles, Burnham and Clague are expected to enhance coordination among relevant state agencies, local governments, businesses, marketing, environmental, and other non-government organizations to help focus attention on construction and maintenance of recreation infrastructure.

The six-million-acre (9,300 sq. mi.) Adirondack Park is the largest park in the contiguous United States.  Almost half of the park consists of Forest Preserve — lands and water protected as “forever wild” under the state’s Constitution.  The Catskill Park is 700,000 acres, about 40% of which is Forest Preserve.

The Adirondack Council has been calling for better management of the Adirondack Forest Preserve, especially the park’s overused and overcrowded wilderness trails and summits. The organization has worked with the Leave No Trace Center for Outdoor Ethics to develop a new strategy for the park and is also working with NYS DEC, the Adirondack Mountain Club, the Regional Office for Sustainable Tourism and Stewart’s Shops on the Love Your Adirondacks Campaign (#LoveYourADK) to promote Leave No Trace principles.

The Adirondack Council’s recent State of the Park report for 2021 contains several examples of the need for further action to address Forest Preserve management.  The Council even more recently released Adirondack Vision 2050 addresses the park’s long-term needs for better management and oversight, including additional state personnel to carry out those objectives.