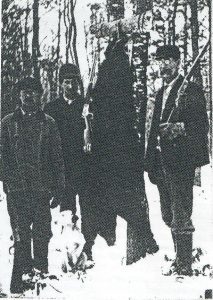 On November 20, 1956, the New York Times described “an army of hunters” descending upon Sullivan County, leading to traffic jams “here and there” on area roadways. The county was among the most popular hunting grounds in New York, the Times reported, and had led the state in the number of deer killed for several years.

In fact, Sullivan County has a long history as a paradise for hunters. And also for those who spin hunting yarns. For nearly two hundred years, observant writers, beginning with the poet Alfred B. Street, have chronicled the triumphs and tragedies, the successes and failures, of hunting big game in the county.

Street’s poignant tale, “The Lost Hunter,” a haunting look at the pursuit of game and the inherent dangers the quest presents is just one of several poems he devoted to the sport. He also wrote “The Hunter’s Flight” and “Deer Shooting,” among other works on the subject.

James Eldridge Quinlan writes prolifically of hunting in his History of Sullivan County, delighting readers with the exploits of such renown woodsmen as Nelson Crocker, who once came upon seven panthers at once, Cyrus Dodge, who shot four panthers at one time after being chased by them into Long Pond, and Calvin Bush, “the prince of panther-killers.”

Red Badge of Courage author Stephen Crane, in his newspaper dispatches later collected as Sullivan County Tales & Sketches, often cited the popularity of hunting here. Furthermore, in a piece entitled “The Way in Sullivan County,” Crane wrote that “a county famous for its hunting and it hunters, is naturally prolific of liars. Wherever the wild deer boundeth and the shaggy bear waddleth, there does the liar thrive and multiply.”

Crane writes that “in a shooting country, no man should tell just exactly what he did. He should tell what he would have liked to do or what he expected to do, just as if he had accomplished it.” The hunting yarn, Crane maintains, is an inevitable evolution of the sport that creates “great liars.”

No Sullivan County hunter was ever quite as successful – or spun as many colorful yarns – as Johnny Caesar Cicero Darling. The legendary Darling lived in the hills of Shandalee, and according to his biographer, Dr. Moritz Jagendorf, once brought home a deer caught with his bare hands. The deer had been trapped in the deep, early snows of Shandalee, and Darling had come upon it on a rare occasion he was without his trusty rifle, Nevermiss.

Not to lose out on the catch, “he leaped over the stone fence into the snow and lifted the deer by his antlers, though the deer was a full five hundred pounds. For you must know, though Johnny was a little man, he was mighty as Samson in the Bible and quicker than a panther in the woods. He swung the animal round and round and round his head and then brought it down with a mighty crash, and it was ready for skinning.”

In the 20th century, long-time hunting guide Frank King of Forestburgh carried on the tradition of tall tale telling, with many of his stories gaining additional credibility by virtue of their publication in the New York Times.

By King’s time, Sullivan County had developed a reputation as “probably the finest deer country in the State of New York.” There were 489 deer taken in the county in 1933 and 567 the following year. By 1935, the Times was reporting that in proportion to its size, Sullivan “is said to rank next to Pike County, Pa. As the most heavily populated deer area in the East, if not in the country. The shooting here is regarded as good if not better than that to be found in the Adirondacks.”

That November, some 4,000 hunters descended upon Sullivan County for opening day; State Game Protector George Hembt considered it a “normal turnout.” Many of these hunters were distributed throughout over 500 camps throughout the county, and most hunted on lands closely protected the rest of the year.

“The best deer country is controlled by clubs which own large tracts, such as the Hartwood Club, with 22,000 acres, and the Merriewold Club with 3,000 acres,” the Times reported on November 3, 1935. “The Rockland Light & Power Company owns some 30,000 acres of land that is thick with the animals, while the famous Bradford estate of 18,000 acres, a virtual deer preserve, this year is being leased in strips to individual guides, camps, and clubs.”

King led a party of 15 hunters on a portion of the Bradford estate on opening day in 1935, and although they failed to bag even one buck, it was – perhaps predictably – one that got away that provided the most excitement.

King reported that one of the hunters in his party that day wounded a tremendous buck -“it was believed to have had at least twenty points” – and trailed the brute through the mountains for three miles, only to lose the trail in the laurel thickets.

That’s the kind of story that Stephen Crane would appreciate.

Photo: A photo showing hunters in Sullivan County. The author Stephen Crane is believed to be second from left.