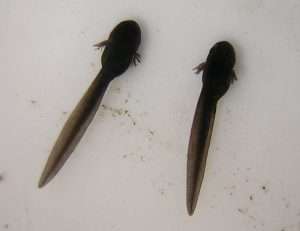 Every so often, an obscure technical innovation really lights me up.

In mid-October of this year, a team of German scientists published a report on their work injecting tadpole noggins with algae.

This enabled the tiny brains (of amphibians, not researchers) to photosynthesize when exposed to light, flooding neurons with oxygen and rendering the frog-babies more intelligent. Or at least not brain-dead, which those tadpoles were before being converted to plant-imals.

In an October 13th, 2021 entry in the journal iScience, lead author Hans Straka of Ludwig-Maximilians University in Munich explained that he’d been happily noodling along, measuring how much oxygen that an African clawed frog tadpole brain uses. He doesn’t elaborate on why he was doing this, but I’m guessing it was simply because he found someone nerdy enough to underwrite his efforts.

The fun part began when Dr. Straka had lunch – and maybe a few drinks, from the sound of it – with a botanist, and a crazy-cool science experiment was born. In Straka’s own words, “For many people, it sounds like science fiction, but after all, it’s just the right combination of biological schemes and biological principles.” Pretty sure this idea was decidedly scheme-heavy, at least to start out.

As we know, tadpoles normally absorb dissolved oxygen in the water through their skin. In a pinch they can surface to gulp air, and take in a bit of O2 through their stomach linings. For the purposes of the experiment, researchers immersed tadpoles in oxygen-depleted water until brain activity was nearly zero. Then they injected photosynthetic green algae into the tadpoles’ hearts, which were still beating, and snapped on a sun-lamp.

Fortunately for all involved, African clawed frog tadpoles are translucent. This was handy for researchers, who could see that within minutes, algae had been distributed throughout the amphibians’ brains. And it was good for the tadpoles because the algae could freely photosynthesize, pumping their brains full of oxygen, which allowed them to resume normal activities. Well, apparently normal. The before/ after standardized testing component of the study was dropped when it became known that tadpoles could not hold pencils.

Certain thin-barked deciduous trees, notably poplars like trembling and bigtooth aspen, can photosynthesize through their bark. This gives them an advantage in the dormant season any time that temperatures rise above freezing. Even the younger tissues of other hardwood species have chlorophyll under the bark, which is why you see green if you scratch a twig with your fingernail.

This of course opens up a host of further scientific inquiry lines. For example, can humans take advantage of algae in a similar way? Take the bright-green Incredible Hulk. Marvel Comics is tight-lipped on the details of Hulk’s super-strength, but perhaps he’s reaping the benefits of photosynthesis. That might explain why algae injection was the only performance cheat that Lance Armstrong didn’t employ – it’s not easy being green if you want to fool the judges.

An infamous and very orange ex-US president once advocated injections of chlorine, and later of sunlight, as possible treatments for a novel pandemic. What a mercy this research came out after his tenure – I’m not sure the world could have stomached the green-orange color combo.

Ideally, these findings out of Ludwig-Maximilians University could benefit victims of stroke or drowning, or allow humans to work in anoxic (and well-lit) environments. Dr. Straka says his team now must look at what happens in the longer term following algae injections.

It’s possible that an immune-system rejection of the algal cells could lead to serious complications. Although at times my brain functions so poorly that I’ve wondered about an algae infection, I now realize it was probably fungus, and that I can actually gain from the green stuff. I look forward to hearing more in years to come.