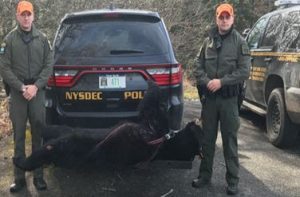 Environmental Conservation Officer (ECO) Palmateer reported he received an anonymous tip in early October about a wounded bear seen near land conservancy property in the town of Greenville, Greene County, during opening weekend of bow season. Knowing this area is closed to hunting and not high density for bears, ECO Palmateer contacted Investigator Sulkey for help surveilling the area.

The Officers reported discovering four tree stands baited with mixtures of feed, corn, and mineral blocks. They also located a broken arrow with blood on it. On Nov. 6, opening day of crossbow hunting, ECOs Palmateer, Smith, and Investigator Sulkey returned to the location just after sunrise.

They reported observing four subjects, including one minor, hunting over bait. One subject also allegedly possessed an illegal crossbow.

After conducting interviews with the subjects, the ECOs reported that one hunter admitted to shooting and wounding the bear on opening day of bow season. Officers issued 11 tickets, including charges of hunting deer with the aid of bait, placing salt licks on lands inhabited by deer, illegal feeding of whitetail deer, hunting with an illegal crossbow, failing to carry tags afield, hunting bear with the aid of bait, and illegal pursuit of black bear. All tickets are returnable to the Town of Greenville Court. 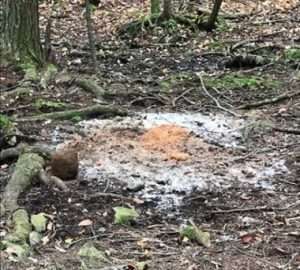 hen on Nov. 20, ECO Smith received a call from a concerned hunter in the town of Lexington regarding an illegally harvested black bear. The hunter was afield for the opening morning of the regular season for the Southern Zone and witnessed a sow with three cubs descending the mountain through his property. He contacted the other members of his hunting party to advise them it is illegal to harvest a bear from a group in the Southern Zone.

Shortly after texting his hunting party he heard four shots from an adjacent property in the direction the bears were traveling. The hunter later located evidence of an animal being harvested and contacted ECO Smith.

ECOs Smith and Palmateer responded to the location to investigate and collect evidence, including photos, video, and witness statements. After interviewing nearby residents, the ECOs located the sow bear carcass at a residence in Prattsville. The ECOs said that the individual who harvested the bear admitted to taking the sow and was issued appearance tickets returnable in the town of Lexington Court. The bear was seized as evidence and the meat donated.

The following day, Nov. 21, Greene County ECOs busted another baited hunting camp in the town of Hunter, Greene County, after receiving tips one week before opening day of the rifle season. Acting on the tips, ECO Palmateer and Investigator Sulkey surveilled the property and reported finding piles of corn at multiple locations.

On opening morning, ECOs Palmateer, Smith, and Investigator Sulkey entered the property and reported that they found three different subjects hunting over large piles of corn. After further investigation, the Officers say they discovered a fourth hunter had shot a black bear on the same property.