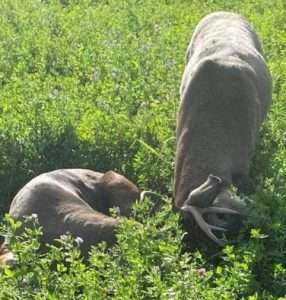 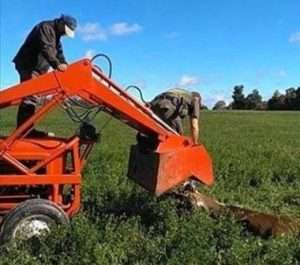 ECO Godson arrived at the scene and observed two large bucks with their antlers so intertwined the animals could barely move.

Using a winch, catch pole, a reciprocating saw, and a tractor for elevation, ECO Godson worked with a local farmer to remove three antlers.

Eventually, both bucks were freed from one another and soon ran off into the woods unharmed.

Photos, from above: bucks with antlers locked; ECO Godson works to free two bucks that are stuck together at the antlers; and ECO Godson and assisting farmer holding the cut antlers provided.