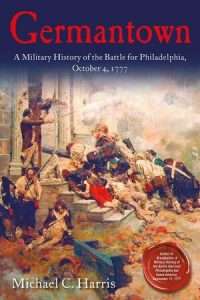 Today, Germantown is a busy neighborhood in Philadelphia. On October 4, 1777, it was a small village on the outskirts of the colonial capital whose surrounding fields and streets witnessed one of the largest battles of the American Revolution.

The bloody battle represented George Washington’s attempt to recapture Philadelphia, but has long been overshadowed by better-known events like Brandywine, Saratoga, and Valley Forge.

Despite a complicated plan of attack, George Washington’s Continental Army seemed on the verge of victory at Germantown, until decisions at the highest levels of the army took that promised victory away.

The Fraunces Tavern Museum will host “George Washington and the Battle of Germantown,” a virtual lecture set for Thursday, October 14th.

In this lecture, Michael C. Harris will discuss the battle and its implications. Harris is the author of Germantown: A Military History of the Battle for Philadelphia, October 4, 1777 (Savas Beatie, 2020).

The lecture will take place via Zoom at 6:30 pm. Registration is required. For more information or to register, click here.