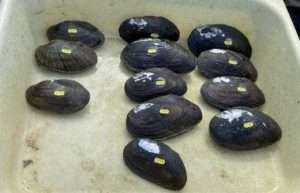 The Alcoa Massena-West Plant is an aluminum production plant on the north shore of the lower Grasse River. In the 1950s, Alcoa began using and discharging polychlorinated biphenyls (PCBs) into the Grasse River, contaminating water and sediment.

In December 2019, NYS Department of Environmental Conservation (DEC) and the Saint Regis Mohawk Tribe signed a cooperative agreement to accelerate the restoration of natural resources in the St. Lawrence River Area of Concern (AOC) at Massena/Akwesasne, which includes the Grasse River.

As cleanup efforts began along the river, approximately 80 percent of the freshwater mussel community was determined to be at risk of destruction due to their inability to escape the work sites and the organism’s slow reproductive rate.

The Grasse River’s freshwater mussel community is remarkable for its density and diversity; at least 15 different species have been found here. The mussels perform the critical functions of nutrient cycling, sediment structure, and forage base.

The following actions have been completed, according to DEC:

DEC is expected to continue to oversee these projects to ensure the habitat recovers as expected and expects to oversee an effort to return the recovered mussels to remediated areas, possibly as early as 2022.