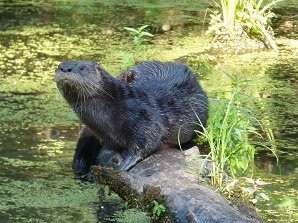 The North American river otter (Lontra canadensis), a member of the weasel family, is about 3-4 feet long including their tails. They have a streamlined body, short legs with fully webbed feet, a muscular tail, and dense, short, glossy fur — all of which aid them in being excellent swimmers. They also have close-able nostrils and ears for swimming and foraging underwater.

Historically, river otter could be found throughout New York, but they declined due to unregulated hunting, habitat destruction, and water pollution.

In the early 1990s, the river otter was only found in the eastern half of New York State.

The New York River Otter Project helped bring river otter back to Western New York, with the help of volunteers and DEC staff. From 1995 through 2000, 279 river otter were captured in Eastern New York and released at 16 different sites across the western part of the state.

When and Where to See Otters:

Read about the lifecycle of river otters.

Photo of a river otter by Tim O’Toole.