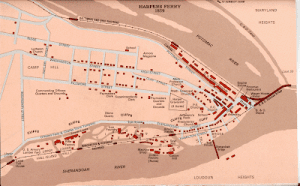 At the other side of the bridge Stewart Taylor and Watson Brown were posted to guard the rear. The others snuck toward the armory building along the Potomac River and seized a second watchman, Daniel Whelan. When Whalen refused to turn over the keys, Aaron Stevens used a crowbar to open the door.

Brown announced: “I came here from Kansas, and this is a slave State; I want to free all the Negroes in this State; I have possession of the United States armory, and if the citizens interfere with me I must only burn the town and have blood.”

Edwin and Hazlett Coppoc crossed the street and seized the unguarded arsenal and William Thompson and Oliver Brown proceeded toward the bridge over the Shenandoah River and occupied it. A few bystanders were captured on the street and held in a building in the yard of the armory.

Brown took several men nearly a mile up the Shenendoah to the Hall rifle works, where they overtook the guard and posted Kagi and Stevens to hold the building (they would be later joined by Lewis Sheridan Leary).

In under two hours from the time they had left the Kennedy Farm, John Brown’s guerrilla band had seized the armory, arsenal, and a rifle works, cut the telegraph lines, and seized the bridges into Harpers Ferry.

Three white men (Stevens, and Cook and Tidd, who by then had returned from cutting the telegraph wires) and three black (Leary, Osborne Anderson, and Shields Green, who had left Frederick Douglass’s side to join the raid) were sent into the countryside to encourage those being held as slaves to revolt. They forced Colonel Lewis Washington (great-grandnephew of George Washington) to turn over to a pistol given the first president by Lafayette, and a sword allegedly once owned by Fredrick The Great.

About a dozen enslaved people were brought to the armory and put in charge of their former masters. There is some question as to the extent that they participated in the events of the raid, and many seem to have deserted the revolt. At least one however, Lewis Washington’s coachman Jim, fought “like a tiger” according to Osborne Anderson and would die in the battle against the slavers.

Still, at about midnight on October 16th the raid seemed a success and from the rifle works up the Shenendoah Kagi and Stevens sent messages to Brown: we need to pull out immediately, into the hills, to strike again another day.

It was then the John Brown made his fateful error. For what reason there are differing views, but whether Brown was overconfident, or becoming disheartened by the response of those who had been freed from slavery, or for some other reason lost to history, he stalled.

The entire group, having freed about a dozen people, could have then retreated into the hills and launched raid upon raid, growing their citizen army into the bane of the slave power.

Instead Brown chose to hold the armory.