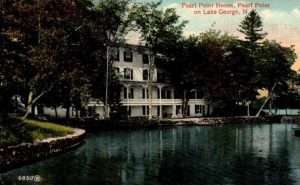 On October 2nd, 2005, the 40-foot cruise boat Ethan Allen capsized on Lake George with 49 senior citizens on board. Twenty were killed making it the most deadly tragedy in the history of Lake George and the Adirondack Region.

Until the sinking of the Ethan Allen, that lamentable distinction belonged to a similar-sized steam-powered boat, the Rachel. 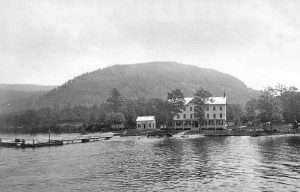 On the night of August 3, 1893 the Rachel was chartered by more than twenty guests of the Fourteen Mile Island Hotel to take them to a dance at the Hundred Island House. The Rachel was owned by the Pearl Point Hotel but the usual captain, a man named Barber, fell ill and went home early leaving the boat in the hands of a less experienced pilot, Claude Granger.

The boat arrived safely at Fourteen Mile Island Hotel and with the passengers loaded, twenty-nine in all, left the dock at 9 pm. There was little or no moon as the boat neared Hundred Island House. The passengers on the deck were laughing and some ladies singing as Granger steered unknowingly out of the channel and struck an old dock south of the hotel tearing a large hole in the side of the boat below the water line. 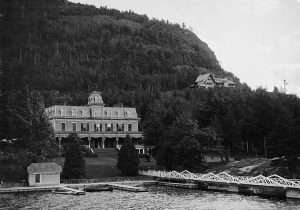 Some of the passengers were caught on the shade deck and died quickly as the boat listed and almost immediately sank. With only her smokestack left above water, a number of men from shore rowed boats from the two nearby hotels to the scene to rescue the survivors. A young man named Benedict, an excellent swimmer, dove for his sister but couldn’t find her. Nineteen-year-old Frank Mitchell, of Burlington, drowned while trying to save his mother who also drowned. Eight other women (some from Warrensburg, Troy, Hoboken, and Brooklyn) drowned.

That night, nine bodies were recovered, three more were found later. The New York Times reported that “one result of this accident is to show how necessary is the legislation which was attempted a few winters ago by gentlemen interested in Lake George navigation, who attempted to have a law passed that would prohibit pilots or engineers from having charge of steamboats on Lake George unless they could pass an examination before a board of experts; also to have boilers tested regularly.”