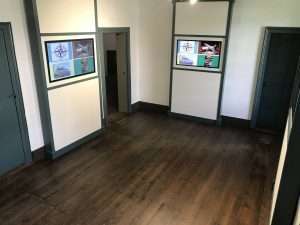 Senate House State Historic Site has unveiled a new display in the orientation room of the historic Senate House in Kingston, NY.

Visitors can experience the new display on a guided tour of the 18th century home of Abraham VanGaasbeek and the meeting place of the first New York State Senate in the midst of the American Revolution.

After restoration work was completed on several rooms in Senate House, the opportunity arose to re-imagine one of the most flexible spaces in the house, the site’s orientation room.

This room was not part of the structure in 1777 when the first meeting of the New York State Senate met in the VanGaasbeek home, but was added in the 19th century as a caretaker’s quarters for those maintaining Senate House.

Through the years, the space has evolved as an introductory point to orient visitors to Senate House before making their way through the house. The new display, developed with the assistance of the Bureau of Historic Sites, includes multiple screens that allow staff leading tours to call up various images, maps, and other visual aides to help tell the story of Senate House in a new way.

Admission also includes the site’s museum building with two floors of exhibits. Tours will be held on the hour, with the last tour leaving at 4 pm each day. Admission is $7 for adults, $5 for seniors, and children 12 years of age and younger are free.

Photo of orientation room of the Senate House provided.