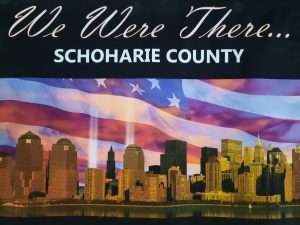 The Schoharie County Historical Society will host a public screening and panel discussion of the documentary film We Were There: Schoharie County on 9/11 on Friday, October 29th at 7 pm in the Wieting Theater located in Worcester, NY.

Produced by the historical society in 2019, the film is an account of what many of those that responded to the 9/11 from Schoharie County experienced and the action they took in the days and weeks that followed.

One-on-one interviews featuring several local emergency responders are accompanied by images from the attacks in New York City and the monumental rescue effort that followed. While some images may be recognizable from newspapers, television screens, and previous accounts of the events, several provide a unique and rarely-seen look at what first responders encountered when they arrived and met with the massive devastation.