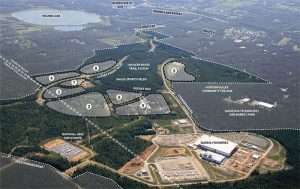 Tommy Luther began with a hotel on the east side of Saratoga Lake and soon began reforesting failed farms in the sandy soil of Malta and Stillwater, Saratoga County, NY. By the 1930s, Luther owned the largest private experimental forest in New York State, at 7,000 acres.

His granddaughter and later generations developed housing beginning in 1979, and created a water system. The forest, now harvested under contract, is still more than 3,500 acres.

Local historian Field Horne will give a talk, “The Luther Forest: Five Generations,” based on a project he completed three years ago in which he arranged the 150 years of archives accumulated by the Luther Forest and Saratoga Water Services corporations. The talk will be illustrated by a century and a half of images from the company’s archives. After the program, Horne will sign copies of his recent book of the same title.

The event is part of the Saratoga County Historical Society’s annual meeting and will be held at the Saratoga County History Center (Brookside Museum) in Ballston Spa on November 4th. The annual meeting will follow Horne’s presentation and offer attendees an opportunity to learn about the organization’s short and long-term plans, as well as vote on important organizational measures such as the vote on trustee candidates and the budget. New programming, exhibits, and events will be debuted, and trustees will be on hand to answer questions and respond to comments.

Both Horne’s presentation and the annual meeting are free and open to the public. The event begins at 7 pm.

The Saratoga County History Center is dedicated to preserving and sharing the diverse histories of Saratoga County. In addition to the venerable Brookside Museum, the History Center offers a variety of innovative, exciting, and educational programming online. For more information visit their website.