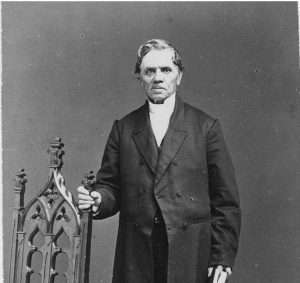 The meeting was broken up by an angry mob. Initially stationed in Utica, Everett was forced to move several times because his views were considered so radical during those early times. His church services were often interrupted by people who rejected his abolitionist message.

He eventually moved to the Remsen-Steuben region of New York and became a publisher as well as a preacher. His books were distributed throughout the country, the territories, and even internationally. He also translated and published antislavery speeches of Frederick Douglass and Harriet Beecher Stowe, author of Uncle Tom’s Cabin.

While in Remsen he became a stationmaster in the Underground Railroad and assisted many runaway slaves escape to Canada. By the time of his death, he was internationally known and revered.

The Oneida County History Center will host a presentation by Ted Engle of the Saint David’s Society, on the life of Rev. Robert Everett on Saturday, October 9th.

This event will be held in person at the History Center at 1 pm, as well as virtually via Zoom. Those attending via Zoom should register online.