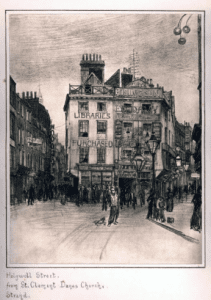 This remarkable tale could have served as one of the “rags to riches” stories that made Horatio Alger such a popular author in America during the later decades of the nineteenth century.

Demolished in 1901 and now part of London’s lost history, Holywell Street was a narrow squalid alleyway with overhanging fronts, just off Westminster’s fashionable Strand. It was named after one of the local wells, the sacred waters of St Clements Church that still survives today, and gave Holywell Street its nickname of the “Backside of St Clements.”

The first homogeneous group of occupants in the district were Jewish immigrants. Many of them worked as tailors and for years one side of the street was almost entirely tenanted by second-hand clothes dealers who collected and repaired discarded garments, re-selling those as rags (or “clobber” in London slang). Holywell Street was referred to as Rag Street.

The opposite side of the alleyway housed a number of small independent printers and booksellers. In the aftermath of the French Revolution the area was a hideout for radical thinkers, publishers, spies, and informers. For a while, Holywell Street was a hotbed of rebellion. Increasingly, the nature of literature changed in content. Unregulated bookshops started flogging erotica and obscene books.

It was in this sordid environment that America’s first multi-millionaire started his career as a young immigrant from Germany. 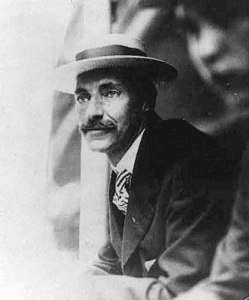 Johann Jakob Astor (now remembered as John Jacob Astor) was born on July 17, 1763, in Walldorf (near Heidelberg). Aged seventeen, he moved to London to join his elder brother Georg (George) Peter who worked there as an instrument maker, specializing in flutes (he later also sold pianofortes on behalf of other manufacturers). Having been trained in his brother’s workshop, they traded as George Astor & Co.

George was the craftsman; John the sales manager. It was a mutual decision for John to move to America in order to explore the potential import market for flutes and other musical instruments. At a later stage he would also act as American agent for John Broadwood’s rapidly expanding British piano company. The plan was encouraged by Heinrich Astor (Henry Astor), the second eldest child in the family, who had signed up in 1775 as a Hessian mercenary to fight for the British in the American Revolution. Once in North America, he left the military and settled in the city of New York.

In November 1783 John boarded the North Carolina, reaching Baltimore in the spring of 1784 after a hazardous crossing. On board he befriended a dealer who made him aware of the potential riches of the North American fur trade. Soon after arrival in New York he worked several months for the prominent Quaker merchant Robert Bowne, learning how to buy and sell furs. He then began to purchase raw hides from Native Americans himself and had them prepared for export to London at great profit.

In September 1785, Astor married Sarah Cox Todd who descended from Scottish immigrants. She proved to be an astute partner who took her share in running the business, managing the firm when he was on work trips away from home. Four years later he became an American citizen. That same year John Jacob was accepted as a Freemason of the Holland Lodge no. 8 (part of the Grand Lodge of the State of New York), which gave him the opportunity to start building a network of contacts amongst business leaders and political power-brokers. In 1790, his name first appeared among other leading merchants in the New York Directory and Register.

Astor opened his own fur goods shop in the late 1780s. He initially traded from a rented property in Little Dock Street, Manhattan. In 1794, he and his wife bought a home and business property at 149 Broadway, right in the commercial heart of the city. Business was booming.

In 1808, he founded the American Fur Company, controlling the trade for the next three decades. His monopoly extended to the Great Lakes Region and Canada, and later expanded into the American West and Pacific Coast. He also remained involved in the music business, although his brother had died in London in 1813. Ruthless and efficient, he diversified his interests, becoming active in banking, shipping, and even smuggling opium into China. 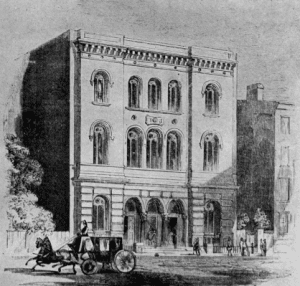 After Astor sold his share in the American Fur Company in 1834, he used his vast wealth to buy and develop large tracts of real estate, having sensed that the city’s rapid expansion would move northward onto Manhattan Island. John Jacob became America’s first multi-millionaire merchant.

At the time of his death in 1848, he left money in his will to build Astor Library in East Village, Manhattan, which was later consolidated with other libraries to form the New York Public Library. The neighborhood of Astoria in Queens was named after him and so was Astor Place, a one-block street in East Village, beginning at Broadway Avenue around 8th Street and leading to Lafayette Street.

From 1852 until 1936, Astor Place was the location of Bible House, home of the American Bible Society. Not bad for a young man who had started his working life residing in London’s heart of profanity.

Members of the Astor dynasty continued to play a dominant role in financial affairs and high-society for many generations to come. There would be an ongoing American and British family line. 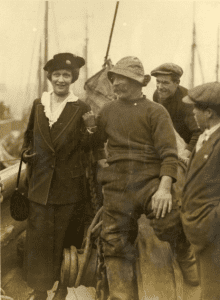 William “Willie” Waldorf Astor, the only child of John Jacob III, was an arch-conservative with political ambitions. After three years as U.S. minister to Italy, he became increasingly disgruntled about his lack of political advancement, and moved himself and his fortune to England. In 1893 he acquired the country estate Cliveden in Buckinghamshire and became a British citizen six year later.

When in 1906 his son Waldorf married Virginia-born Nancy Langhorne (who, in December 1919, was the first woman to sit in the House of Commons, representing Plymouth), the couple received Cliveden as a wedding gift. They turned the estate into a center of political and literary life with guests that included Lloyd George, Winston Churchill, Gandhi, George Bernard Shaw, Charlie Chaplin, and many others who arrived to enjoy the lavish hospitality.

During the late 1930s, the “Cliveden Set” came to be associated with more sinister socio-political developments. The estate was a meeting place for Prime Minister Neville Chamberlain and supporters of his appeasement policy towards Adolf Hitler. The Astors themselves were accused of Nazi sympathies as they expressed support for the movement’s anti-Semitic and anti-communist ideology. Nazism was promoted as a way of quelling social unrest and political polarization in Europe.

One of the more intriguing members of the Astor dynasty was John Jacob IV, great-grandson of the immigrant fur and instrument trader who had founded the family fortune. Born on July 13th, 1864, in Rhinebeck, Hudson Valley, he was the only son of financier and race horse breeder/owner William Backhouse II and Caroline “Lina” Schermerhorn who had been born into a shipping family that was part of New York’s aristocracy of original Dutch settlers. 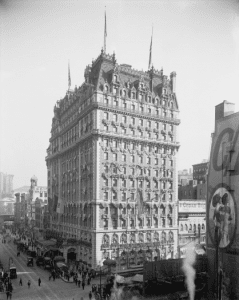 John Jacob IV was a real estate developer, a Colonel in the Spanish-American War, and a science fiction novelist. In 1894 he published A Journey in Other Worlds, a Romance of the Future. Set in the year 2000, the novel describes mankind’s first interplanetary voyage and visits to Jupiter and Saturn by brave explorers. He also patented a number of inventions, including a pneumatic road improver, but his name is above all associated with New York City’s most famous hotels.

The original Waldorf-Astoria was built in two stages, as the Waldorf Hotel and the Astoria Hotel (the world’s “most luxury hotel”), which accounts for its dual name. The site was situated on Astor family properties along Fifth Avenue. The complex was opened in 1893 and demolished in 1929 to make way for the construction of the Empire State Building.

John Jacob was also responsible for the Knickerbocker Hotel. Built in 1906 at the crossroads of 42nd Street and Broadway, the venue shook Times Square out of its slumber by hosting the biggest names in entertainment, politics, and high society. With its sophisticated Beaux-Arts design, European ambience and sumptuous parties, the hotel attracted both glitterati and dignitaries. It also served as the home of Enrico Caruso and others.

The onset of Prohibition marked the beginning of the end for the hotel. In 1921 the property was converted into offices, becoming known as the Knickerbocker Building. 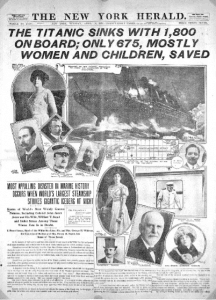 John Jacob’s career was cut short when he died after the Titanic sank on her maiden voyage in April 1912. His pregnant second wife Madeleine Force Astor survived the disaster. In the aftermath, ships were sent to search for the bodies of 1,517 passengers and crew who had drowned in the sinking. Only 333 of them were ever found.

Astor’s remains were recovered on April 22nd. Labelled body no. 124, he was identified by his diamond finger ring and the initials sewn on the label of his jacket. Inquiries into the calamity would later take place in New York. Location of the inquest was John Jacob’s Waldorf-Astoria Hotel.

At times it takes a disaster to rattle political or moral belief systems. The sinking of Titanic made a deep impact on both sides of the Atlantic and forced a fundamental rethink of values and convictions. To many social commentators the sad event was more than a catastrophe, it was a warning against human pride and presumption. As Edward Stuart Talbot, Bishop of Winchester, preached in April 1912, the fate of the ship was a “mighty lesson against our confidence and trust in power, machinery, and money.”

(William) Vincent Astor, John Jacob’s son from his first marriage, was born on November 11, 1891. The pain of losing his father at a relatively young age may well have affected his moral compass. Having inherited a fortune, he dropped out of Harvard University, and ditched the family’s hard line capitalist practices. Vincent showed concern for New York City’s social inequalities by seeking compassionate solutions.

Over time, he disposed of the family’s notorious slum housing and reinvested in more ethical undertakings. Having sold properties under generous terms for conversion into homes, he was responsible for the construction of a large housing complex in the Bronx. In Harlem he transformed a piece of real estate into a children’s playground. In addition, he backed the New Deal and supported other reforms. Vincent was the first Astor to show a real sense of social commitment.

Between 1937 up until his death in 1959 Vincent headed the corporation that published Newsweek magazine. Fittingly, for a time the magazine’s headquarters was located in his father’s former Knickerbocker Hotel.

Illustrations, from above: Holywell & Wych Street (postcard drawing by F.L. Emanuel); John Jacob Astor IV in 1909 (Library of Congress); drawing of the Astor Library in 1854 (artist unknown); electioneering: Nancy Astor meeting fishermen in Plymouth, 1919; Knickerbocker Hotel seen from Seventh Avenue, circa 1909; sinking of Titanic as reported by The New York Herald featuring a photo of John Jacob Astor IV; and service led by Rev. Canon Hind aboard the Mackay-Bennett for the burial-at-sea of 116 third class passengers on the Titanic whose remains had been recovered from the North Atlantic.