In New York, the bohemian scene at 647 Broadway seemed a male dominated affair too. Historians have given ample attention to Charles Pfaff, the Swiss-born owner of the establishment, and to Henry Clapp, the journalist who brought bohemianism to the attention of a wide readership.

The fact that Walt Whitman’s growing reputation was linked to his association with Broadway’s unruly band, obscured the presence of those who were left in his shadow. Yet, some of the strongest characters within the Pfaffian circle were women. 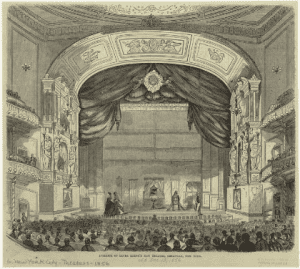 In November 1856 a new playhouse opened at 622/4 Broadway, between Bleecker and Houston Streets, called Laura Keene’s Theatre (later renamed the Olympic Theatre). Close to Pfaff’s basement, Keene and many of her actors and actresses made their way to his establishment after or in between performances.

Pfaff’s was one of the few of New York’s saloons that welcomed women. Laura Keene was born Mary Frances Moss in July 1826 in Winchester, Hampshire. She was seventeen when she married Henry Wellington Taylor, who claimed to be a nephew of the Duke of Wellington. The couple had two young daughters when Henry was arrested, convicted (crime unknown), and shipped to a penal colony in Australia. Mary had to earn her own living.

She joined a theater company. As acting was considered a suspect occupation, she had to re-invent herself. Leaving her daughters with her widowed mother, she changed her name to Laura Keene and made her debut in Edward Bulwer-Lytton’s melodrama The Lady of Lyons in October 1851. She gained further experience working with Lucia Elizabeth [Madame] Vestris, a prominent figure in theatrical management, who became a role model.

In 1852 she accepted an offer from London-born James William Wallack to join his New York theater company. The latter had just assumed the management of Brougham’s Lyceum (renaming it Wallack’s Lyceum) on the west side of Broadway. It was a profitable move and she was soon able to send for her mother and two girls. She toured in the States, and in between acting duties traveled to Australia in the forlorn hope to trace her missing husband.

On her return to the United States Laura met John Lutz (whom she married in 1860) who would take charge of the business side of her acting career. Back in New York, funds were raised and a specialist architect nominated to design a Broadway theater after Laura’s specifications. Keene’s Theatre soon made its mark. In November 1860, she premiered the extravaganza The Seven Sisters (with music by Thomas Baker) which ran for 253 performances, an astonishing total for the time.

Keene built a reputation as a fine actress and shrewd manager at a time when only men held this position. As her daughters grew up they also became involved in the theater business, either in management or supporting and/or singing roles. 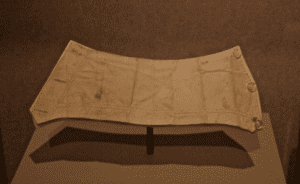 Her name lives on in American historiography for another reason. Laura’s most famous production was the three-act farce Our American Cousin by English playwright Tom Taylor which had premiered on Broadway in 1858. At the end of the Civil War she was requested to produce a celebratory performance of the play on April 14th, 1865 in the presence of Abraham Lincoln.

Keene was in the wings awaiting her cue when the President was shot by the actor John Wilkes Booth. She claimed to have held the Lincoln’s head and that her gown was soaked with his blood, although many suspect that the tale may have been a fabrication.

Queen of the Long Table 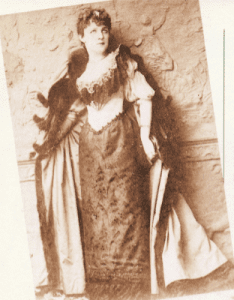 Ada Agnes McElhenney was born in 1834 on her family’s cotton plantation on Toogoodoo Creek in Charleston County. Having been orphaned at a young age, she grew up in the care of her maternal grandfather as part of an aristocratic South Carolina family.

Having escaped the life of a Southern belle and estate mistress at nineteen, she settled in Greenwich Village earning a living as a columnist. Using the pseudonym Ada Clare (after Charles Dickens’s orphan in Bleak House), she built up a following of readers with an interest in New York’s theater and demi-monde.

At the same time, Ada pursued a career as an actress although initially was limited success. She was then offered the opportunity to travel to Paris as correspondent for the successful Sunday newspaper The New York Atlas. Between November 1856 and January 1857, she published a series of lively and provocative reports from the Latin Quarter which were received with delight by her New York readership.

In one of those articles she revealed her passion for the New Orleans-born virtuoso pianist Louis Moreau Gottschalk, the son of a Jewish businessman from London and a French Creole mother. Louis composed music portraying the songs and dances of Louisiana slaves which captured his Parisian audiences and satisfied the era’s craze for exotic cultures. Not long after her return to New York in the summer of 1858, Ada gave birth to a son out of wedlock. Aubrey was believed to be Gottschalk’s child.

She participated in New York’s literary life and wrote a weekly column in Henry Clapp’s Saturday Press in which she discussed topics from female emancipation to the status of American theater. From her home she ran the Sunday night West 42nd Street Coterie, a gathering of writers and actors.

She provoked public opinion by introducing herself and Aubrey as “Miss Ada Clare and Son.” She refused to accept the contemporary characterization of a ‘fallen’ woman. Instead, Clare presented herself as a proud and unapologetic single mother. More outrageously, she preached the doctrine of free love and adopted a bohemian lifestyle.

With utter contempt for convention and decorum, she was the perfect Pfaffian. The primary seat at Pfaff’s long table (offering space to some thirty people) was for reserved for Ada Clare, the Queen of Bohemia. To Walt Whitman, she represented the ideal of the modern woman: talented, intelligent, and emancipated.

Ada Clare moved to California in 1864. For some time she contributed articles to the Golden Era and penned a poorly received confessional novel, Only a Woman’s Heart (1866). In 1874, she returned to acting and went on a tour of cities in upstate New York. She died in Rochester in March that same year, stricken by rabies after she had been bitten by a theatrical agent’s dog.

Adah Isaacs Menken was a poet and actress known for her sensual stage performances. Born Adelaide McCord in June 1835 near New Orleans probably into a Catholic family, Adah worked from an early age (her father had died young) as an actress in various theaters learning her trade. Aged twenty-one, she married the Jewish musician Alexander Menken in Texas. Her partner wished for a conventional relationship. While prepared to adopt the Jewish faith, she refused to give up acting. The marriage ended in divorce.

In 1858 she settled in New York where she met prize fighter John Heenan, the Benicia Boy. Having married him, he turned out to be an abusive character. She lost his baby at birth and divorced him. Adah returned to the theater and became a minor celebrity on the Bowery circuit, appearing blackface in a minstrel show, and doing impersonations of the great actor Edwin Booth as Hamlet. 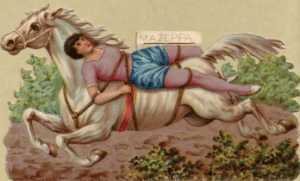 A friend of Ada Clare, Menken was one of those regulars at Pfaffs’s who openly ignored conventions of propriety. She rose quickly to notoriety. At a time when women were expected to be self-effacing, Menken smoked in public, cropped her hair, starred in provocative stage roles, and wrote poetry. Encouraged by Walt Whitman, she had poems published in the New York Sunday Mercury. She was a “New Woman” in the making.

Her role in the melodrama Mazeppa (based on Lord Byron’s poem) which opened in 1861 in Albany, NY, created a sensation. Dressed in a flesh-colored body stocking which gave the illusion that she was nude, she appeared strapped to a horse which “galloped” down a ramp towards the audience. 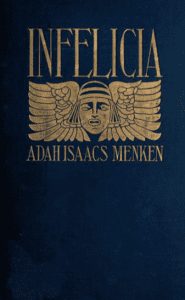 Having disposed of two husbands, she left New York in August 1863, heading for San Francisco where Mazeppa brought her a new enthusiastic following. During her stay in the city she went through another two failed marriages. Longing for wider adoration, she took Mazeppa to Paris where she had an affair Alexandre Dumas pére whose son threatened his father for being a senile Romeo. Menken then left for London where her act excited Charles Dickens, Walter Swinburne, and others.

Bohemianism had been a dazzling firework display, a short-lived spectacle. Soon after, dark skies returned. The world moved on, routinely and relentlessly. Menken’s health declined; her wealth was wasted. The wild flower wilted.

In 1867 she collected her poems in the volume Infelicia dedicated to Charles Dickens with the novelist’s permission. She gave her last London stage performance in May 1868 and returned to Paris, but the fast-living city had forgotten her. She faded away (most likely tuberculosis), forgotten and friendless. Her passing went unmarked. Thirty-three years old, she was buried in the Jewish section of the cemetery of Montparnasse.