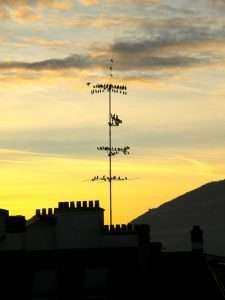 One morning in early autumn, I was running errands in downtown Keene, New Hampshire, when I was stopped in my tracks by a flash of yellow. Crouching down, I found a gorgeous, palm-sized bird, olive above, with a belly as gold as sunshine. It was a species I’d never seen before, and it was lying dead on the ground beneath a store window.

After consulting several field guides and two friends who know the intricacies of warbler identification far better than I ever will, I deduced that it was a mourning warbler – a secretive songbird of boreal and high-elevation forest clearings, with a migration route that tracks to Central and South America. Imagine flying all that way – a wonder of beauty and color – only to be felled by a run-in with a pane of glass.

Sadly, the warbler is part of a much larger pattern. Migrating birds face many hazards, including storms, habitat loss, and predation. But two threats working in concert have proven particularly deadly: artificial light and glass windows.

Many birds fuel up by day and migrate by night, when temperatures are cooler and aerial predators are less active. Starlight may also aid in navigation. Artificial lights can both attract and disorient migrating birds, drawing them to cities – and, for many, into collision courses with windows. 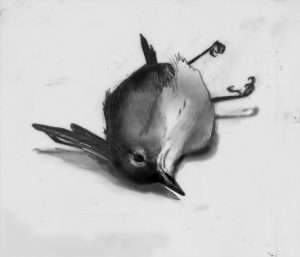 One of the most well-studied instances of the effects of bright lights on migrating birds is the Tribute in Light, the powerful twin beams that illuminate the New York City skyline each September as a memorial to those lost in the terrorist attacks on September 11, 2001. September is peak time for songbird migration, and when weather conditions align just so, thousands of birds can become “trapped” in these beams, circling until they drop from exhaustion or strike the sides of nearby buildings. Studies have shown that bird densities in lower Manhattan are up to 150 times higher when the Tribute lights are on. NYC Audubon now coordinates volunteers to monitor the memorial; when too many birds become caught in the lights, Tribute operators turn them off for a brief time to allow the migrants to disperse.

New York is not alone. Intensive monitoring at a 40-story convention center in Chicago, for instance, has documented 40,000 window-strike fatalities since 1978 – but also showed that numbers dropped from thousands to hundreds of birds per year when the building began shutting its lights off at night in the early 2000s.

Birds can hit windows of any height, at any time. However, during migration, window strikes commonly occur in early morning, when hungry migrants drawn toward buildings by nighttime lights search for food and instead encounter glass – imperceptible to birds – that reflects the sky or nearby vegetation.

Somewhere between 365 million and 988 million birds – from songbirds to raptors – fall victim to building collisions in the United States each year, second only to outdoor cats as the largest source of direct, human-caused mortality for U.S. birds. Despite the attention garnered by high-profile skyscrapers, a 2014 study in the journal “Ornithological Applications” found that high-rises were responsible for fewer than 1 percent of window-strike deaths, with 56 percent attributed to low-rise buildings and 44 percent to residences. The researchers also determined that structures that kill only a small number of birds annually – like my local shopping center in Keene – account for a large proportion of total window-strike mortality.

Thankfully, this is a problem with solutions. We can all help by turning off exterior lights and unused interior lights overnight, especially during peak bird migration season in spring (April 1 to May 15) and fall (September 1 to October 31). When you must use indoor lights after dark, opt for lamps that illuminate a small area instead of overhead lights that brighten the whole room, and keep your curtains or blinds closed.

In addition, if you live or work in a building with large windows, keep an eye out for window-strike victims, then apply screens, stickers, or decals to break up the reflections of any problem glass. For helpful guidance on design considerations for buildings big and small, visit the American Bird Conservancy’s Bird-Friendly Building project.

Migration has always been fraught with danger, but today’s glass-hardened landscape presents a novel and extraordinary threat. With a bit of effort, we can soften that landscape, and help the birds that grace us with their presence move safely through it.

Brett Amy Thelen is Science Director at the Harris Center for Conservation Education in Hancock, New Hampshire. Illustration by Adelaide Murphy Tyrol. The Outside Story is assigned and edited by Northern Woodlands magazine and sponsored by the Wellborn Ecology Fund of the New Hampshire Charitable Foundation.