Answers to those questions are among the findings of the National Monument Audit, a first-of-its-kind report issued by Monument Lab, a Philadelphia-based nonprofit art and history studio.

With support from the Mellon Foundation, Monument Lab and its research team spent a year scouring hundreds of thousands of historic records, developing a study set of nearly 50,000 monuments, and analyzing those statues, monoliths, and markers to gain new insights into the country’s commemorative landscape.

The audit is not intended to be a record of every monument in the US. Such an undertaking would be impossible, largely because there is no official shared definition of what a monument is, a point that “cannot be overstated,” according to Monument Lab’s report, which also notes that “the debate over what constitutes a monument plays out daily in every corner of the country.” 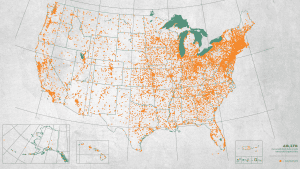 For its part, Monument Lab defines a monument as “a statement of power and presence in public,” a meaning shaped by a decade of conversations in public spaces across the country.

Among the key findings:

I. Monuments have always changed.

II. The monument landscape is overwhelmingly white and male.

III. The most common features of American monuments reflect war and conquest.

IV. The story of the United States as told by our current monuments misrepresents our history.

Some statistics about America’s monuments

50% of the top 50 most memorialized people enslaved other people.

10% of the top 50 most memorialized people are Black/Indigenous.
6% Percentage of the Top 50 who were women.

22:2 is the ration of recorded monuments depicting mermaids (22) compared to those depicting US Congresswomen (2)

In 2011 the first monument to an individual person of color (Dr. Martin Luther King Jr.) was dedicated on the National Mall in Washington, DC.

$40 million in taxpayer funds spent to preserve Confederate symbols and sites, according to Smithsonian Magazine.

The entire study can be found online here.