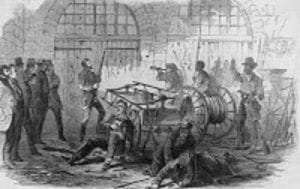 As the first full day of John Brown’s raid dawned almost no one in the village of Harpers Ferry knew what was happening. Charles White for instance, a Presbyterian minister who had spent the evening the raid began on an island between the rifle works, and the armory and arsenal reported that he “knew nothing until daylight when the gentleman with whom we were staying came into our room and notified us.”

Some early reports mistook the raid for a strike of baggage handlers on the Baltimore & Ohio, which may explain while White waited until after breakfast to venture out and investigate. “After breakfast we went out to reconnoitre-and found we were guarded on both sides by Sharps rifles-revolvers and pikes-and not a single available gun or other weapon of defense in all our part of the town which was isolated from all the other part,” he remembered, adding that he and his companions “had no idea how many there were.”

A few others had discovered the raid was taking place. The first is said to have been a Potomac bridge night watchman, Patrick Higgins who had come at midnight to relieve the earlier watch of Bill Williams and found the bridge in the possession of the raiders. Higgins escaped after a struggle and although wounded by a rifle shot made his way to the Galt House, a saloon/hotel near the bridge. Higgins alerted the night clerk who went out to see for himself and was captured by Brown’s men.

At 1:25 am Higgins heard an eastbound Baltimore & Ohio train approaching and ran to warn the conductor. The train was stopped and three men went out onto the bridge and were shot at – free black baggage handler Hayward Shepard was mortally wounded, the first to die in the raid.

Brown made a serious error when he allowed the train to proceed at 3 am. Four hours later the conductor alerted the main B & O office that 150 abolitionists had taken Harpers Ferry, killed a porter, and were attempting to free the area’s slaves. The word was immediately taken to B & O president John W. Garrett, who notified US President James Buchanan, Virginia Governor Henry A. Wise and Major General George H. Stewart of the Maryland Volunteers that a slave insurrection was underway in Harpers Ferry. The worst fears of the southern slavers seemed to be at hand.

Dr. John D. Starry, who arrived at the scene after hearing the shooting on the railroad bridge, treated the wounded porter as best he could and then spent several hours spying on Brown’s men before setting out to warn as many people as he could.

By about noon on October 16th, Brown’s last chance to escape into the countryside came and went – he was in command of the bridges, and held about 35 prisoners.

Armed locals arrived and organized a makeshift attack with their own hunting guns, some using shot molded on the spot. Then two militia companies arrived from Charles Town – together they stormed the bridges and drove the half dozen or so of Brown’s men guarding them back.

Dangerfield Newby, born enslaved, and carrying in his pocket a letter from his wife (enslaved just 30 miles south) begging him to bring her and their children out of bondage, was shot during the retreat from the bridge and killed – the first of John Brown’s men to die.

Locals cut off Newby’s ears and disemboweled him; they poked sticks into his wounds and threw his body into a gutter where the hogs would feed on him. The entire scene was later joyfully described by a Maryland journalist.

When the militiamen stormed the rifle works John Kagi and Lewis Leary fled toward the river and were shot in the back. Leary, the black descendant of a Revolutionary War veteran, survived for a time after being hauled onto a rock by his uncle John Copeland. A local approached the rock but wet powder kept his rifle from firing and Copeland was taken alive.

Old Osawatomie Brown seems to have been unwavering after losing control of the bridges. As a force of Marylanders approached the armory he assembled his men and instructed them to “make every shot count” and to fire first in order to send a message that they would not run. Several Marylanders fell in the volley; others retreated to the Potomac bridge to await reinforcements.

Brown sent William Thompson, the brother of Henry Thompson (the North Elban who married John Brown’s daughter and who built the Brown farm there), along with a prisoner and under a flag of truce to negotiate free passage for the return of the prisoners. Thompson was captured. He would later be dragged by a local mob into the street and onto the railroad trestle for target practice. “You may take my life, but 80,000 will arise to avenge me, and carry out my purpose of giving liberty to the slaves,” he said – and he was right.

And second attempt at sending a negotiating party ended in the shootings of Aaron Stevens and Watson Brown. When Will Leeman tried to make his way to the schoolhouse for reinforcements, he was shot crossing the river and crawled onto a rock. George A. Schoppert, from Richmond, waded out to him carefully holding his revolver out of the water. When he reached him, Leeman pleaded for his life and Schoppert shot him in the face at point blank range. For several hours Leeman’s body lay exposed to the shots of the slavers until he finally floated away.

Brown left two men to hold the armory while they retreated to a brick fire house (Albert Hazlett and Osborne Anderson, who would later escape) but by late afternoon the engine house was surrounded by a dozen militia companies and hundreds of civilians; eleven more companies arrived by nightfall.

Several more times Brown attempted to negotiate safe passage during lulls in the firing. An attack on the engine house by a company of militia was repulsed, but by 11 pm Brown had just four uninjured men left: Edwin Coppoc, Jeremiah Anderson, Dauphin Thompson, and Shields Green. His sons Watson and Oliver lie wounded on the floor; Oliver begged his father to shoot him to end his misery.

At dawn J.E.B. Stuart approached the engine house carrying a written demand by Robert E. Lee for unconditional surrender. When Brown refused to surrender Stuart stepped aside and a group of militiamen using sledgehammers and a ladder as a battering ram broke open the door.

Israel Green burst through and was the first to find Brown, who was identified by the prisoner Lewis Washington. He thrust his sword and it hit Brown’s belt buckle and bent before stabbing him deeply (he had come with only a presentation sword, not an actual military weapon). Green then slashed at John Brown hitting him several times in the head. Anderson was bayoneted, Dauphin Thompson (also from North Elba) was stuck to a wall with a bayonet.

Five men were captured alive. Aaron Stevens was suffering horribly from his wounds, having been shot several times in the upper torso. Edwin Coppoc and African Americans John Copeland and Shields Green were relatively unharmed.

John Brown, bleeding profusely as he was carried out of the engine house, was expected to die.

Photo: Interior of the engine house just before it was stormed from Frank Leslie’s Illustrated Newspaper, November 5, 1859.