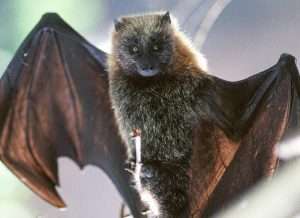 Some flowers we typically see in the spring are apparently confused and put out a few end-of-season blossoms. And everywhere we turn, yards and businesses are decorated for Halloween.

In keeping with this time of year, I’ve decided to bless you all with a series of articles about one of my all-time favorite animals: bats. I know, I know – I say this about so many animals, but truthfully, bats do top the list. Perhaps this is because they are so reviled by the majority of people and I love to root for the underdog. In fact, this was probably why my interest was piqued in the first place. But as I learned more and more about bats, I discovered just how fascinating these winged mammals are.

Today I think we will start with a simple overview of just what a bat is. A bat is a mammal: warm-blooded, covered with fur, and nursed on mother’s milk when young. And, it is the only mammal that can fly (despite the name, flying squirrels can only glide).

Bats (and there are over 1,000 species worldwide, a grand total of about 25 percent of all mammal species) are classified in an order all their own: Chiroptera, a word that literally means “hand wing.” This is very appropriate, for if one takes a good look at a bat’s wing, and then compares it to a human hand, the similarity is amazing. About all you’d have to do to make a human hand into a bat wing would be to extend the fingers and attach webbing. Voila! The structure and layout are practically identical.

Speaking of names, let’s take a look at what some people worldwide call bats, for this is very interesting (at least for those of us who are as equally fascinated by language as we are by nature). One of China’s many names for bats is yeh yen, which translates into the delightful “swallow of the night.” This demonstrates something insightful about the Chinese: they like bats (bats are actually considered to be good luck), and they knew long ago that bats are not mice. By contrast, let’s look at some European names: France – chauve-souris – “bald mouse”; Norway – flaggermaus – “flying mouse”; Germany – fledermaus – “flying mouse”.

In all fairness, it is easy to see why bats have been considered merely mice with wings – they do look rather mouse-like, at least externally. They are small, they have large ears (some have enormous ears), they have dense fur mostly in shades of brown and grey, and they have somewhat pointy snouts (again, we are talking about msot European and northern North American species). However, one quick look at dentition is enough to prove that bats are not rodents. Rodents have those long, yellow-orange front teeth that constantly grow and are designed for gnawing. Bat teeth (non-tropical species) tend to be almost all pointy and sharp – perfect for crunching through the exoskeletons of insects.

When it comes to bad PR, bats have had more than their share. Let’s start with something common: photographs. Typical photographs of bats show them with their mouths open, baring all those very pointy teeth. It’s enough to make anyone jump back. However, most bats are rather shy and retiring by nature. These photographs are typically taken of captured bats that are being blown in the face by the photographer or his assistant. If someone was blowing in your face, wouldn’t you object? It was bat enthusiast and founder of Bat Conservation International, Merlin Tuttle, who began taking photographs of bats in their natural state. When one views these photographs, one is more inclined to consider these animals “cute,” rather than “creepy.”

Then there is the whole rabies debacle. Whenever rabies is mentioned, the animal used to represent the disease is the much-maligned bat. Did you know that skunks, raccoons and foxes are much more of a threat when it comes to the transmission of this disease? The national statistic for bats with rabies is less than 0.1 percent. In New York it is higher, but that could be because more bats are turned in for testing, and bats that are easily captured are more likely than not to be sick. Most bats are harmless. However, if you encounter a bat that is acting abnormally, and is easily captured, there is probably something wrong with it. Such animals should be captured (never handle a live bat with bare hands) and submitted for testing.

Vampire bats do exist, but there are only three species and they mostly live in Central America. There are no vampire bats in our part of the world. Vampire bats are small – very small. One could sit in the palm of your hand with room to spare. One species feeds only on the blood of birds, another eats strictly mammal blood, and the third can go either way. Studies have found that it is difficult to get these bats to actually bite people – humans are simply not a high priority for them.

And as for bats flying in our hair, well, everyone has a bad day. Haven’t you ever walked into a wall or doorway? I have a theory about this. How many of you have ever noticed clouds of insects around your head? Many insects swarm around an obvious landmark, like a person standing on a beach or in an open field. If a bat is around feeding on these specific insects, then it is possible that your sudden movements, either avoid the insects or the in-coming bat, make it difficult for the bat to avoid your head. Accidents happen.

In the next few articles, I will introduce you to each of the New York State’s bats; it is important to know our neighbors.