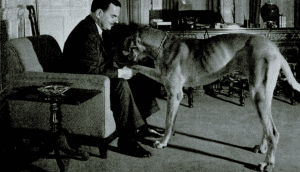 What Adirondack mammal did President Grover Cleveland chase while fishing with his outdoor guide, “Dave,” at Upper Saranac on June 4th, 1887?

A black bear. “The guide said it was a burned log, but the president thought otherwise, and keeping his eye on the object soon after saw it was a black bear,” The Morning Star of Glens Falls reported on June 7th, 1887. “The two men followed the bear, which was a large one. The race was exciting, and ended by the bear shaking the water from his shaggy sides and disappearing in the depths of the forest.”

Following are more anecdotes of the lighter side of politics, collected from Northern New York Historic newspapers.

German-language singing societies of New York City joined forces in a lobbying effort to pass a state law to allow beer sales after 3 pm on Sundays, The Morning Star reported on June 6,1887.

A new occupant arrived at the Albany Executive Mansion on Christmas 1946: Champion Gerhard II, an eight-week-old Great Dane, a gift to Gov. Thomas Dewey from his wife.

It must not have been a white Christmas at Washington, D.C. in 1922, but it was a gold Christmas at the White House.

“Every employee of the White House, down to the last messenger and kitchen maid, received today a five-dollar gold piece with the personal compliments of the President and Mrs. Harding,” the Associated Press reported on December 25th, 1922. “Mr. Harding took a complete holiday, going golfing in the morning and spending a good part of the afternoon with Mrs. Harding in her sick room.”

“Some of the guessers are trying to deduce the probable date of adjournment of Congress from the fact that Senator Crane is to be married in July. But, so far as that is concerned, the New York United States senators adjourned some time ago.” – The Argus of Albany, June 9th, 1906.

Photo: Thomas Dewey with his Great Dane ‘Canute’ in 1944.