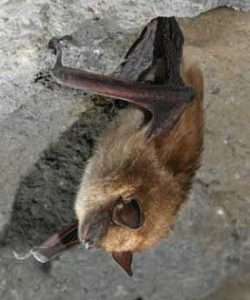 Bat Week is an internationally recognized week-long focus to raise awareness about the important role bats play in our environment and is a great time to appreciate New York’s nine bat species.

Bat Week is observed October 24th through 31st and is organized by representatives from conservation groups and government agencies in the United States and Canada.

Many species of bats, including little brown bats, have faced severe population declines due to white-nose syndrome. The disease has killed more than 90 percent of bats at hibernation sites in New York.

The public can help protect New York’s bat populations by avoiding caves and mines, which may be home to hibernating bats, from October through April. Human disturbances are very harmful to bats. White-nose syndrome makes bats very sensitive to disturbances. Even a single, seemingly quiet visit can kill bats that would otherwise survive the winter. If you see hibernating bats, assume you are doing harm and leave immediately.

Anyone entering a northern long-eared bat hibernation site from October 1st through April 30th, the typical period of hibernation for bats, may be subject to prosecution.

More information on bats can be found online.

Photo of bat by Al Hicks.