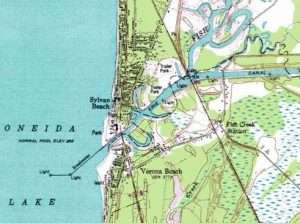 The Oneida County resorts of Sylvan and Verona Beach are located on the sandy eastern shore of Oneida Lake. This twenty-two mile lake, and its geographic orientation, affords this setting spectacular sunsets. These factors made the eastern shore a desirable vacation destination in the nineteenth century, and a thriving resort community developed along Wood Creek.

Originally, Wood Creek had been improved in the late eighteenth century by the Western Inland Lock Navigation Company as part of that private entity’s effort to link the Mohawk River to Lake Ontario.

The Barge Canal enlarged and straightened Wood Creek, and provided a large harbor entrance to Oneida Lake, which was protected by two concrete piers extending to the deep waters of the lake. The pier on the Sylvan Beach side was equipped with a weather tower, and a lighthouse on the Verona Beach side guided mariners to the harbor. 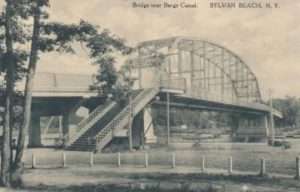 The twin communities were linked by a new Barge Canal bridge, and were served by both the O&W (New York, Ontario and Western Railway) and the Lehigh Valley Railroad, which delivered vacationers.

In 1922, the Barge Canal was in its fifth season of operation, having been opened in 1918 during the First World War. There remained a shortage of craft available on the new waterway; this deficiency kept many inadequate boats in operation to meet the demands of shippers.

In the early summer of 1922, DuPont consigned a shipment of 321 tons of smokeless gunpowder from Wilmington, Delaware bound for Buffalo, New York. The shipment would travel the entire route by navigable waterways. The gunpowder was shipped in 15” by 20” metal containers that were packed in 5,300 wood crates weighing 140 pounds apiece.

The crates of smokeless powder were loaded on a concrete barge. Vessels made of concrete were a wartime expedient which saved steel for weapons production. A total of twenty one of these vessels were built for the United States government for use on the Barge Canal during the war. The concrete barges had a large cargo capacity, and were sized for Barge Canal efficiency. However, the concrete barges were easily damaged. In minor collisions, inherent to canal transportation, resilient wood and steel vessels would recoil or bounce.

The hulls of the concrete barges were easily punctured. These craft proved to be a failure in design, and by 1922 these fairly new craft were near the end of their operational life.

The vessel transporting the DuPont gunpowder was designated U.S. #117, and had been built in Ithaca; the present owner obtained the craft as war surplus. The barge had been taking on water, and the crew was able to maintain freeboard by constant pumping. Just west of Rome, New York, on June 10, 1922, the U.S. #117 sank in the Barge Canal during a furious cloudburst.

After nearly two weeks, it was pumped out enough to be floated the short distance to New London, where it could be placed in the Junction Lock. This structure provided the connection from a twenty-one mile section of the old Erie Canal, which was retained as a navigable spur and feeder, to the newer Barge Canal, and through the use of pumps could serve as a dry-dock. The U.S. #117 was dewatered in the Junction Lock and the soaked gunpowder cargo was transferred to three older wood boats to continue to Buffalo, where the wet gunpowder would be salvaged. The U.S. #117 returned to Albany for overhaul and ironically sank again in August of 1922 near Troy on the Hudson River.

Wood canal boats were contracted from the Syracuse Sand Company. Two of the vessels, the Alice T. Clark and the Odd Fellow, belonged to Syracuse Sand, as well as the steam tug William P. Donnelly. The third canal boat, the Dobson Bros., was borrowed from Charles Wright of Durhamville, and the small fleet was operated by a Syracuse Sand crew.

The tow started for Buffalo on June 25 and by mid-afternoon approached the Sylvan/Verona Beach Harbor. Heavy waves on Oneida Lake were striking the breakwater piers. The burdened old canal boats were leaking badly, and tied up in the harbor to pump out and allow the wind to subside.

The three canal boats, each 96 feet long, were tied in tandem along the docking wall on the Verona Beach side of the harbor. Because this was a Sunday afternoon in late June, the twin resorts were in full swing. The population of the villages was swollen with visitors and residents of the summer cottage community. The Fire Chief from Sylvan Beach, David Owens, watched the gunpowder fleet dock near his summer cottage. He spoke with the crew about their soaked cargo, which they considered harmless.

There were several vessels already moored in the harbor when the gunpowder fleet arrived. The tug Betty of Utica was secured directly across the canal on the Sylvan Beach side, as well as the dredge Ontario II, scheduled to begin dredging the canal inlet to the harbor. On the Verona Beach side of the canal the yacht Mac II was moored, her owner performing maintenance. The harbor was alive with small boats and through canal traffic. Fishermen lined the banks and piers, in pursuit of Oneida’s delectable walleyed-pike.

The crew of the canal boats set up a portable pump, powered by a gasoline engine, on the middle of the three boats to evacuate the bilge. Witnesses stated afterward that the engine was running rough, and giving the crew trouble. Somewhere after five in the afternoon, a spark, possibly from the the portable pump, started the boat on fire.

The Destruction in Verona

The blaze quickly spread through the wood canal vessel. A tremendous explosion followed as the gunpowder blew up and showered flaming pieces of wood over the cottage community of Verona Beach and the two other canal boats, setting them ablaze. Their cargo caught fire and exploded within a minute with a tremendous concussion that shattered windows within a half mile of the beach.

Tugboat William P. Donnelly, alongside the canal boats was engulfed in flame and the four crew members on deck had their clothing immediately set ablaze. It was typical in those days for entire families to work upon canal craft. The tug’s engineer Ellis Green and his wife, who was the cook aboard, were caught in the firestorm. Ellen Green’s dress was set on fire and the couple ended up in the water, where the unfortunate woman from Moravia drowned.

The blast reached across the canal harbor, and the tug Betty’s crew were burned by the sheet of flame which crossed the Barge Canal. The crew managed to use the steam remaining in her boiler to propel the tug in reverse, away from further danger. The dredge was set on fire in the same manner as many of the buildings in Verona Beach, by flaming brands rocketing from the exploding canal boats. The watchman aboard sounded the craft’s whistle, and the dredge crew put out the fire and saved the vessel. The Mac II had a fire ignite at the stern of the vessel, which the husband and wife crew managed to extinguish.

The bucolic atmosphere of the resort area was suddenly shattered. Panic spread quickly through the throngs of people who were instantly affected by the conflagration. Many summer colonists sought refuge from the rain of firebrands in the water of the outlet. The Sylvan Beach Police Chief contacted nearby Lock #22, halting all canal traffic there.

The wind protected Sylvan Beach, but had the opposite effect on Verona Beach, as it spread the fire to more buildings in the cottage community. The fire spread to many automobiles, setting their cloth tops and upholstery on fire by the flaming debris showering down. The extensive wooded area behind the community also was set afire.

Eyewitness to the first explosion was Chief Owens, who instantly realized from his earlier conversation with the crew how volatile the entire situation was. He immediately telephoned for firefighting assistance from the neighboring communities of Rome and Oneida, who dispatched their newest motorized equipment to the fire scene.

Because of the intensity of the fire, the pumpers were compelled to locate on the Sylvan Beach side of the canal and run their hoses across the bridge. Bucket brigades of volunteers kept the wood deck of the bridge from igniting behind the valiant firefighters.

Extinguishing the flames lasted well into the next day. Burned to ruin were the three-story Temperence Hotel, an electric lighting power plant, a two story boarding house, a general store, two concession stands, a gas station, two houses and fifteen cottages, two boathouses and one automobile.

The only visible reminder of the tug William P. Donnelly was the stack and whistle, extending above the canal surface. Of the three canal boats containing the gunpowder, two of the craft had sunk to the bottom of the canal. The third was burned to the water line and was later sunk to stabilize what remained. Debris was everywhere, powder cans floated on the water and littered the landscape. Sightseers found that strings of the water-soaked powder would readily burn.

The Oneida County Coroner immediately launched an investigation into the cause of the explosion. Many of the buildings and businesses that burned were not insured, which hampered the rebuilding of the waterfront area in Verona Beach. A joint lawsuit against DuPont of $407,000 was initiated, and a greatly reduced out of court settlement of $35,000 was awarded in 1939.

Illustrations, from above: Map of Sylvan Beach; bridge over Barge Canal; and Verona Beach article from the New York Times.