The reason for celebration was the unification of Germany following Prussia’s crushing defeat of France in the Franco-Prussian War. The emphasis on Peace was less about the end of hostilities between Prussia and France than it was about a new and lasting peace among the previously independent states of Germany, some of whom were caught in a rivalry between Austria and Prussia that had already erupted in war, in 1866.

Syracuse was not alone in marking the occasion. Peace festivals were held dozens of American cities. New York City’s Festival was on the 10th of April. The New York Times reported on the 2nd of May that similar events in Pittsburgh, Columbus, Detroit, Louisville and Madison, Wisconsin all took place on the same day as Syracuse’s. Buffalo held its Friedensfest on the 29th of May.

Studying Syracuse’s event however, gives us a window on the urban geography of this key upstate city in the 1870s and on the nature of its German community at the time. It also shows a sincere jubilation which Germans and non-German Americans shared, with little to foreshadow the tensions that would emerge internationally and within the United States later in the First World War era.

Like other New York cities, Syracuse had a large and important German population in 1871. The New York State census taken four years later showed that Syracuse’s German-born population was 5,401 in a city of 48,000. The Syracuse Journal wrote on May 1st, 1871 that there was a German population of 10,000, which is probably accurate or even an underestimate if one includes American-born children growing up in German-speaking families. The cities of Buffalo, Rochester and Albany had even larger German-born population at the time. In Syracuse, Germans lived mainly in the 4th and 2nd wards, in the area north of the Erie Canal and east of the Oswego Canal (now Routes 690 and I-81 respectively).

The wave of German immigrants who settled in Syracuse in the 1850s and 60s came mainly from three separate states in what is now southwestern Germany: Baden, Württemberg, and Hesse-Darmstadt. Many of them came after the failed Revolutions of 1848. The ‘48ers, as they were known, had envisioned uniting Germany under a constitutional government. In Syracuse, as in other American cities, the German community had a range of newspapers, clubs, churches, and schools run in their own language. The center of German life in Syracuse was the building known as the Turnhall on North Salina Street between Ash and Division Streets. 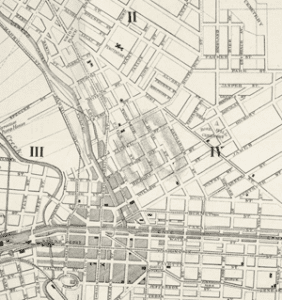 The German Kingdom of Prussia’s quick and decisive victory against France in 1870-71 prompted the leaders of the German states to agree to unify under the leadership of Prussia’s King. A German-language book called the Geschichte der Deutschen in Syracuse (The History of the Germans in Syracuse, 1897) describes how the celebration plans came together.

Members of the Syracuse Schützenverein (founded in 1869, a German rifle-club with as much a social function as a sporting one) sent out a general invitation to a preliminary meeting to be held on the 26th of March. A committee of seven was chosen to lead the planning. They decided to hold a festival for all German speakers in the city, “whether Jewish or Christian; Catholic or Protestant; for the united German fatherland.” (N.B. German translations by the author). As momentum for the celebration built up, the Geschichte says, non-German Syracusans became enthusiastic about it too.

The celebrations on the 1st of May started with a 100-gun salute and a cannon shot at dawn. A two-mile long procession paraded through the streets. The police department was at the head, the fire department at the rear, and an array of civic societies and German choirs ranged in between. They started at the Turnhall and marched through the main streets of German Syracuse: North Salina, Division, Lodi, and Butternut, and into the downtown area.

Streets and buildings were bedecked with German and American flags. Non-German Americans lined the streets waving flags. Some held evergreens, a symbol of Germany used in other Friedensfest celebrations around the country. German Civil War veterans marched in uniform carrying the bullet-hole ridden regimental banners they had taken into combat. A carriage drawn by four horses carried four of Syracuse’s leading Germans dressed as the heroes of German unification: Kaiser Wilhelm, Bismarck, Helmuth Von Maltke and Crown Prince Fritz. In the evening German families let off fireworks and grand banquets were held at Amos Hotel and the Turnhall.

Dwight Hall Bruce wrote in his Memorial History of Syracuse (1891) that “no celebration ever held in Syracuse equalled it in splendor, enthusiasm and magnitude.” There is no record of any concern over the growing power of Germany in Syracuse.

The only non-glowing comment about the event in the English or German-language records is in Geschichte, which records that for some of the ‘48ers, the new Deutsche Reich was “not exactly the kind that [they] had envisioned in their youthful dreams,” probably in reference to Prussian predominance. The Syracuse Union reported that one placard read that “Germany must become bigger,” but did not impute any sinister connotation. The Syracuse Journal recorded that “On no previous occasion has there been in our city a more liberal demonstration in sympathy with a public observance.”

It was a day when a city came together to celebrate an immigrant identity.

Illustrations, from above: the front page of the Syracuse Union German-language newspaper on May 3rd, 1871, reporting on ‘Das deutsche Friedensfest’ in Syracuse; and Map of central Syracuse in 1873 showing the 2nd and 4th Wards, Syracuse’s German neighborhoods.