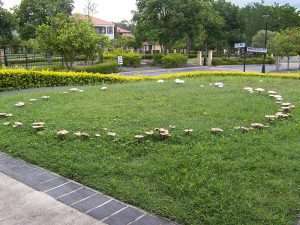 Fairy rings have a rich history in European folklore and myth. Austrians claimed the rings were created where dragons rested, while the Dutch saw them as a place where the devil churned his milk.

Probably the most pervasive tales derived from English, Celtic, French, and Scandinavian folklore: Fairy rings were mystical gathering places created by dancing fairies and elves, and the mushrooms were convenient resting stools for when they tired; any human that dared to enter the ring would be forced to dance until they either went mad or died of exhaustion.

Some Native American tribes attributed the appearance of fairy rings to dancing bison, the large rings made by the adults and the smaller ones by the calves. Today, UFO enthusiasts claim that the rings are a response to an alien spacecraft having landing in the exact spot where the ring formed.

Although lacking the cultural cachet of folklore, the scientific explanation is interesting in itself, even though we still don’t fully understand the whole story. Fairy rings occur quite naturally. Roughly 100 different fungal species are known to produce fairy rings, which are classified into two broad groups: free and tethered.

Free fairy rings grow in open grassy areas, and the fungi are not associated with other organisms. Meadow mushroom, gem-studded puffball, and Scotch bonnet are a few examples of fungal species that fall into this category. The underground body of the fungus, the mycelium, is composed of thread-like cells that feed on dead organic matter. 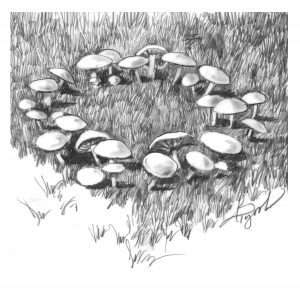 As nutrients are depleted, the mycelium grows outward in a circular fashion. Lacking adequate nutrients, the center portion dies, and a living ring is formed, marking the perimeter of the mycelial growth. A ring can grow for several years, depending on the availability of soil nutrients and weather conditions. This type of fairy ring can become quite large, but the reigning champion, a fairy ring found in northern France, is believed to be nearly 700 years old and about 2,000 feet in diameter.

Tethered fairy rings, in contrast, develop in woodlands and are formed by mycorrhizal fungi. These fungi form important symbiotic associations with many vascular plants, particularly forest trees. In his book Mushrooms of Northeast North America (Lone Pine, 1999), mycologist George Barron notes that trees depend on this type of fungi for survival.

“Each tree has hundreds of thousands of kilometers of fungal threads associated with its roots,” Baron writes. “It is these mycorrhizal fungi that supply the tree with the nutrients and water essential for healthy growth. In exchange, the tree gives the fungus sugars that are manufactured through photosynthesis in its leaves.”

The fungi use the sugar obtained from the partner tree as an energy source for growth and for maintenance of the mycelial network, as well as in the production of the fruiting bodies, or mushrooms. The more common trees in northern forests that form this type of partnership include birch, oak, beech, pine, fir, and spruce.

If you happen upon a fairy ring, take a close look. While you’re unlikely to spot a dancing fairy or a witch, these rings seem magical, just the same.

Frank Kaczmarek is a photographer and retired biologist and author of “New England Wildflowers: A Guide to Common Plants,” a Falcon field guide published in 2009 by Globe-Pequot Press. He lives in Lyman, New Hampshire. Photo of fairy ring courtesy Wikimedia user Mrs skippy. Illustration by Adelaide Murphy Tyrol. The Outside Story is assigned and edited by Northern Woodlands magazine and sponsored by the Wellborn Ecology Fund of the New Hampshire Charitable Foundation.