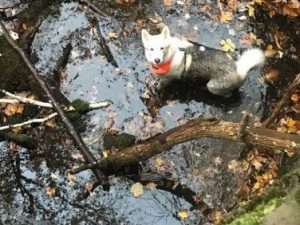 On October 17th at 4:15 p.m., Greene County 911 contacted NYS Department of Conservation Forest Ranger Fox about a dog that fell into a cistern at the ruined Kaaterskill Hotel site in the town of Hunter, in the Catskills.

Ranger Fox and Assistant Forest Ranger France reported that they responded to the location to assess the situation, along with Forest Rangers Martin, Mitchell, and Skudlarek.

Once on scene, Ranger Fox said he found the dog and repelled down to the bottom of the well. He determined the dog was uninjured before tying a webbing harness onto the 65-pound husky. The Rangers lifted the dog to the top of the well and reunited her with her owner. All units were clear of the incident by 8 p.m.

Photo of Husky at bottom of the Kaaterskill Hotel cistern prior to rescue provided by DEC.