The British and their Indigenous allies repeatedly attacked the communities in the Schoharie Valley to the west however, despite the presence of a large militia and three forts to protect the people of Schoharie.

Across Upstate New York communities were divided over whether or not to support the uprising against British rule. Many remained loyal to the crown.  Among them was Adam Chrysler, whose Palatine parents had moved to Schoharie when he was young. He harbored British sympathies. At the start of the Revolution he went west and from there led numerous attacks on his former neighbors in the Schoharie Valley.  The families at Beaver Dam also had many British Loyalists among them.

The Third Regiment, First Rensselaerwyck Battalion of the Albany County Militia was composed entirely of men from Beaver Dam, Hellebergh (now the Town of Knox) and Basic (now Westerlo). In February, 1776 the militia’s officers included Capt. Jacob Ball, Ensign John Shafer, First Lt. John Warner, and Second Lt. Peter Dietz, all of whose fathers were among the very first settlers in the Beaver Dam area.

Like many in the area however, members of the Ball and Warner families found themselves on opposite sides. Capt. Jacob Ball joined the Loyalists and moved to Canada to fight for the British.  In 1777, his replacement, Captain Peter Dietz, was killed at the Battles of Saratoga. He was replaced as Captain by his brother William Dietz.

One Fall, the Loyalists and their allies swept through the Schoharie Valley, burning homes and barns and killing many not huddled inside the valley’s three forts. At Beaver Dam, the militia hastily constructed two wooden forts. One was to the east of Jacob Weidman’s saw and grist mills at the falls on Fox Creek and the other was to the southwest, in the Switzkill Valley.  They left four homes beyond their protection, one of which was the farmstead of Captain William Dietz of the Albany County Militia. His aged father Johannes and his mother Maria lived on the farm, where his family cared for them.

The Albany County Militia were mostly farmers. They were subject to being called up for months, but spent most of their time farming their fields. Because of this, Capt. Dietz was at home when the Loyalists and their Indigenous allies attacked their isolated homestead. His parents, along with his wife and four young children, were killed. Dietz was taken prisoner and brought with others on an arduous journey to Fort Niagara.

Historians Get The Date Wrong


Many dates for the attack have been given over the years. 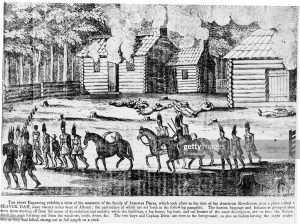 Our Heritage, a 1977 history of the Town of Berne, says it happened in 1780. It then mentions a 1936 account of the event by Town of Guilderland Historian Arthur B. Gregg, which had correctly stated the year and the month, but misstates other parts of the story.

None of them appear to have consulted primary sources.

The Public Papers of George Clinton contains a September 1781 report from John Taylor to Governor Clinton which states: “A party of the Enemy consisting of fifteen Tories & Indians murdered Capt. Dietz’s Father & Mother, his wife, and four children with one Scotch Girl.”

In a letter by Hugh Mitchell, son of Major Andrew Mitchell, to Gov. Clinton a few days earlier on September 4th, 1781, he reports “the murder of Capt. Teets who lived at the Beaver Dam and was taken prisoner last Saturday night… The rest of Capt. Teets family, consisting of his old Father and seven other persons were most inhumanly Murdered, and his house and barn burnt.”

So this event, since known as the “Dietz Massacre,” probably occurred on Saturday, September 1, 1781.

William E. Roscoe’s 1882 History of Schoharie County not only got the date wrong, he also misidentified Capt. William Dietz of Beaver Dam, as William Dietz Esq. of Schoharie, going to far as to list his children who were then still living in Schoharie.

William, Esq. of Schoharie, born in 1712, was the brother, not the son of the massacred Johannes Dietz. Roscoe was correct that this William was a blacksmith who had moved to Schoharie from Beaver Dam. As a prominent citizen during the Revolution, he was on the Schoharie Committee of Safety and sometime before the end of the war became a Justice of the Peace.  Roscoe should have realized that William of Schoharie was much too old to have been a Captain in the Revolution.

Since Schoharie Lutheran Church records reported the death of Dorothea Wanner Dietz on February 7, 1782, that became the date of the massacre in Stanton Dietz’s telling. William of Schoharie died shortly after writing his March 25, 1782 will. Stanton Dietz decided he must have written it in captivity at Fort Niagara and it had been witnessed by fellow prisoners. Someone must have brought it back to Schoharie, he concluded, to be recorded and probated on June 6, 1782.

None of that was true, but when the Town of Berne Bicentennial Commission published Our Heritage in 1977 it repeated the errors in Roscoe’s History of Schoharie County and Stanton Dietz’s family history. 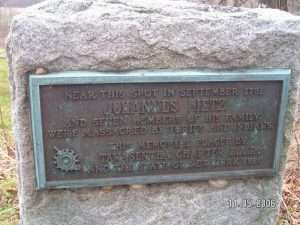 Capt. William Dietz of Beaver Dam was the son of Johannes Dietz and Maria Eberbach. His November 17, 1747 baptism record is in the Germantown (West Camp) Reformed Church, Columbia County. A few years later, his parents moved to Beaver Dam to join his brothers, who had already lived there for a decade. By 1774 William was married to Maria Magdalena Cregeler. They and their four young children lived on the fated Switzkill farm, along with his parents.

In 1926 the Tawasentha Chapter of the Daughters of the American Revolution dedicated a memorial plaque to Capt. William Dietz’s father, Johannes and his seven family members murdered that day in September 1781.

Captain Dietz, the target of the massacre who lost his parents, wife, and children, is not named.

Illustrations, from above: painting of the Dietz Massacre by James Dietz courtesy the Greater Oneonta Historical Society; Dietz massacre engraving from Stories of the Revolution by Josiah Priest; and DAR plaque memorializing the Dietz Massacre on Switzkill Road in Berne, NY.