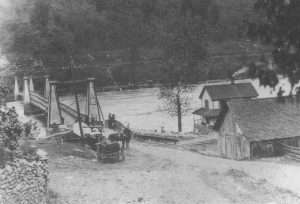 Following three days of heavy rains, the Delaware River crested on October 10th, 1903, destroying several bridges, wiping out the Erie Railroad’s tracks in a number of places, and damaging homes and businesses in three states.

That flood, the result of 20 inches of rain that fell on October 8th and 9th of that year, has become known as The Great Pumpkin Flood, one of the most devastating of all the Delaware River floods, though by no means alone in its destructive wake.

For decades, the memory of watching hundreds of pumpkins bobbing erratically down the Delaware after having been dislodged from their fields by the raging waters, was indelibly etched in the minds of many in the region, setting the Great Pumpkin Flood apart from dozens of other similar events.

When discussing disastrous floods, most old timers today recall the flood of August, 1955, generally considered the worst of modern times, when dozens of automobiles were relocated by the river’s unleashed power. Three Delaware River bridges in New Jersey were destroyed by the rising waters that year, but the spans in the Upper Delaware all survived.

In his 2003 book, Bridges Over the Delaware River, Frank T. Dale notes that other great floods occurred along the Upper Delaware in 1922, 1936, 1942, and 1972. There were serious floods in Barryville the fall of 2004, the spring of 2005 and the summer of 2006, each more destructive than the previous one, and each leaving hundreds of felled trees and other debris in its wake.

In “Reminiscences,” his 1900 account of life along the river, John Willard Johnston notes that devastating floods visited the Barryville area in “1834, ‘37, ‘41, ‘52, ‘69 and the last and greatest in 1895. The result is that sad changes have been wrought upon many portions of the banks and marring that pristine beauty which no conceivable length of years can restore.”

Johnston writes that the “May Flood” of 1832 was one of the most damaging of all, although the Delaware reached higher levels in both the 1869 and the 1895 events. In 1832, the timber rafting industry was at its peak, and following an unusually dry April and first week in May, the rafts of lumber were stockpiled at Handsome Eddy, just below Barryville, awaiting a rise in the water level to enable them to travel downriver. Johnston writes that “not less than two million feet” of lumber was comprised in 20 to 25 double rafts docked at the Eddy.

“About the 8th of May rain commenced falling, fell with violence for nearly 3 days and nights, and the Delaware became a raging flood unequaled in the memory of the oldest inhabitants. For one whole day the surface of the river was literally covered with rafts and lumber of all descriptions; and of the beautiful and valuable rafts anchored in Handsome Eddy, but a single one was saved.”

Johnston writes that the 1832 flood was the worst in the area in “150 years before at least,” and that “it seemed to be the forerunner of many disastrous floods which for a succession of years afterward appeared in the Delaware.”

And, in his own inimitable way, Johnston does not shirk from assigning blame for the increase in occurrence of high water events.

“As every effect must proceed from a cause, the cutting and removal of the forests along the sources of the river, and thereby permitting a more rapid flow of water from rains and snows into the river, may be assigned as the chief cause,” he wrote.

Still, the Great Pumpkin Flood stands out for another reason, as well.

That 1903 flood and a similar, though not quite as destructive flood in March of 1904, led some of the homeowners along the Delaware River in Barryville to take drastic action. In September of 1904, more than 20 property owners along River Road – including Highland Supervisor Fred Freeman and suspension bridge owner Stephen St. John Gardner, as well as trustees of the 127th Improved Order of Red Men and the pastor of the Baptist Church –  signed an indenture ceding their lands along the banks of the river to the state of New York for one dollar.

This was so that the Superintendent of Public Works might construct “a dyke or dykes along the bank of the Delaware River in the village of Barryville in the town of Highland, Sullivan County, so as to discontinue the present overflow of said lands and consequent damage to highways and property in said town.”

The indenture also released the state from any liability for earlier flood damage, including that caused by the 1903 and 1904 overflows. The landowners were assured that the dyke to be constructed on their property would prevent the similar flooding of their land in the future, and for the most part it has done just that, even minimizing the damage in the great flood of 1955.