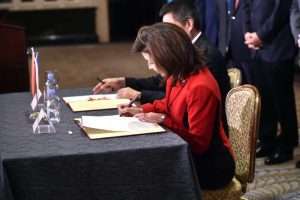 Last week, we saw news that Governor Kathy Hochul instructed state agencies to develop and submit plans for greater transparency. This is good news and welcome news. I’ve watched over the decades as state agencies have restricted more and more of what was once basic and easily accessible public information.

Press reports said that Governor Hochul’s top aides “sent a memo out to the heads of state agencies as part of a ‘government transparency initiative.’ It requires them to ‘assess ways their agencies can be more transparent’ and to submit a proposal to enhance that.”

I salute Governor Hochul for starting this effort. I hope that she follows through and that this work has an impact and leads to real change and is not simply an exercise in political showmanship. The Department of Environmental Conservation (DEC) needs a wholesale makeover with regards to making its Forest Preserve management work transparent and to providing useful information to the public. The list below highlights Protect the Adirondacks’ recommendations about how the DEC could significantly improve its work with regards to Forest Preserve management and honor the goals of Governor Hochul.

In 2020-21, the DEC convened the High Peaks Strategic Planning Advisory Group. That group met in secret for over a year and published scant reports about their discussions. The secrecy around that effort limited public participation. It contributed to the lack of public buy-in, which has allowed the DEC to easily bury away the plan in a dark, moldy file cabinet drawer somewhere. Secrecy in the work of state agencies prevents accountability, which is why state agencies in New York, such as the DEC, like secrecy so much.

Here’s a list of items that we think should be a part of the new “DEC Transparency Plan.” I can only speak to issues of Forest Preserve management. I’m sure advocates who deal with DEC in other areas will also have their own healthy reform lists. This list mainly deals with badly needed reforms for how the DEC manages public information relative to the public Forest Preserve.

1. Make public the “DEC Transparency Plan” that is submitted to Governor Hochul as soon as it’s presented to the Governor.

2. All work plans for Forest Preserve projects, such as trail maintenance or new trail construction or a new bridge, and for every other type of project, should be posted on DEC’s website on the appropriate Forest Preserve unit page once they are finalized and before any work begins. An Environmental Notice Bulletin (ENB) notice should be released about its posting. These plans are already part of the process so making them public should not be difficult.

3. All draft work plans that require any tree cutting whatsoever or use of motor vehicles on the Forest Preserve should be posted on the Environmental Notice Bulletin and subject to public comment. The entire work plan should be posted. Again, these plans are already developed. Adding in heightened scrutiny for the most controversial, and potentially damaging, Forest Preserve projects should not be burdensome.

4. All correspondence between the Adirondack Park Agency and Department of Environmental Conservation in developing a Forest Preserve work plan should be included in the work plan as an Appendix. Again, these memos and emails already exist. They’re being included to provide greater transparency.

5. All correspondence between the Adirondack Park Agency and Department of Environmental Conservation in the development of draft Unit Management Plans (UMPs) should be included in an Appendix in the draft UMP. Again, these memos and emails already exist. They’re being included to provide greater transparency.

6. All DEC contracts for Forest Preserve work should be posted upon enactment. These contracts exist already, so they would be easy to post.

7. All DEC spending on Forest Preserve projects, whether from the general fund or through the Environmental Protection Fund, or any other fund, should be posted annually. This information should include the total costs of the project undertaken. This is pretty basic accounting that DEC already tracks.

8. DEC relies upon a broad interpretation of “administrative personnel” for Forest Preserve work. This involves contract and volunteer work for maintenance of snowmobile trails, hiking trails, lean-tos and roads, among other things, by a wide variety of people. DEC states that these people receive regular training and supervision. These projects involve tree cutting and use of motor vehicles. DEC should publish annually a list of non-DEC employees who undertake Forest Preserve work as well as the date that these individuals received training from the DEC.

9. All trailhead register data should be compiled and posted annually. This task has been difficult for the DEC for years and this DEC trailhead register database has enormous gaps in the historic record. In the past, DEC has contracted for some of this work for specific Forest Preserve units. This is important public information that should be a priority for the department.

10. An annual report for DEC Campgrounds should be published with attendance numbers, reservation data, detailed expenditures/revenues by facility, among other information. All of this data is already generated.

11. An annual report for the Forest Preserve in the Catskills and Adirondacks should be published with trailhead registration data, lists of projects undertaken/completed, costs for each project, detailed expenditures/funding by sources, day-use and over-night camping numbers per unit, among other information. This is basic information, though this will be hard for DEC.

15. All state conservation easements should be posted. These materials already exist and should be fully posted.

16. All harvest information for conservation easement lands should be posted annually, including volumes/species. This should include the acreage of clearcuts/shelterwood/restoration cuts. All growth information for trees on conservation easements lands should be obtained from the private landowners by the DEC and posted annually. All DEC monitoring data should be included. Every five years a carbon sequestration evaluation should be completed and posted publicly to ascertain whether harvesting on conservation easements, where the public often owns 60-75% of the value of the tract, is helping or harmful to climate change mitigation.

17. All state tax payments on all state lands should be posted annually by town and county, and include Real Property Tax Law categories/acreage, school, town, county, special district tax breakouts. The state pays out this money annually, so the DEC should be able to easily obtain this data.

20. End the use of “blackberries” among DEC staff where correspondence and messages are not retained.

21. Prohibit the use of private email accounts or private cell phones for any state business.

22. DEC lobbying activities of the State Legislature should be fully disclosed. DEC should publicly state its positions on any issue that its Legislative staff works on, whether they involve specific legislation, budget issues, or technical advice. DEC needs to publicly disclose the full scope of its lobbying work with detailed monthly reports.

23. All meetings of the DEC Commissioner, senior staff, division and bureau heads with people from outside the agency should be posted monthly, and include a list all attendees from DEC and the public, the subject matter discussed, and decisions/agreements reached.

24. In the end, the state’s Freedom of Information Act law needs to be changed. There should be no “shielded” internal correspondence among state agency staff. No information from state agencies should be withheld.

Opening up and transforming New York State government is a monumental effort, which goes beyond state agencies drafting “transparency plans.” If Governor Hochul is serious about making these changes, she should open up her office to easily available public scrutiny and make her office and her work the most transparent ever by a New York Governor. There’s a lot that Governor Hochul can do to lead by example.

If Governor Hochul is truly serious about making New York State government more transparent she should put new transparency requirements into law, end shielded internal correspondence of state employees, and strengthen and expand the scope of New York’s Freedom of Information Law. Nationally, New York State has long been near the bottom with regards to the ease of public information. New York should look at how a state like California, always near the top, works to provide public information easily and quickly.

We saw with former Governor Cuomo that state agencies modeled their behavior on that of the Governor and his top staff. State agencies were only as good as the Governor wanted them to be. Cuomo practiced a closed-door policy, or worse, with critics, and his state agencies followed his lead. DEC is a model of insularity, where fundamental things about public lands management are routinely withheld from the public and shrouded in secrecy. The coming weeks will show whether current DEC leadership will meet this moment and embrace reforms and transparency.

Will Commissioner Basil Seggos put together a “DEC Transparency Plan” that includes major changes and reforms or will he highlight superficial changes that mask business as usual? I hope that the fact that Governor Hochul is trying to set a new tone and wants state agencies to do better will actually force the DEC to do better.

My golden rule as an advocate is to say the same things in public that I say in private and to say the same things in private that I say in public. I have long argued that sunlight and transparency in the management of the public Forest Preserve will lead to major reforms of Forest Preserve management because sunlight on public agency management decisions brings accountability. Without sunlight, openness, and transparency, it is very difficult to hold state agencies accountable.

DEC should embrace public transparency in Forest Preserve management. The list above is a good start.